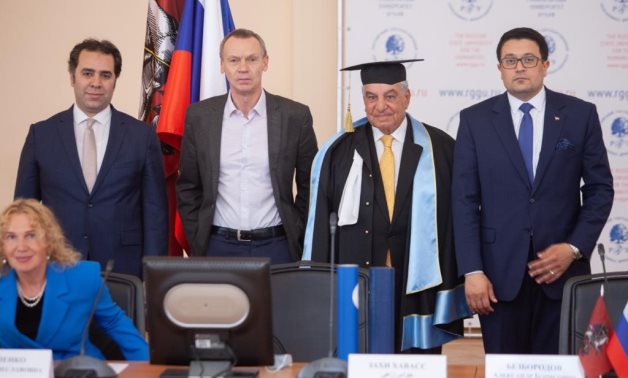 During the ceremony - ET

CAIRO – 29 September 2021: In a huge ceremony at the Russian University for Humanities, Egyptian archaeologist Zahi Hawass received an honorary doctorate from the university.

The President of the Russian University for Humanities announced that the University’s Council decided to grant Hawass an honorary doctorate for his notable work as an Egyptologist in scientific production, restoring antiquities, retrieving stolen antiquities to Egypt and in establishing the Grand Egyptian Museum and the National Museum of Egyptian Civilization.

The ceremony was attended by Ambassador of Egypt to Russia Ihab Nasr and Egyptian Cultural Advisor Mohamed Al-Sergany.

It is worth mentioning that the Russian University for Humanities is the oldest university in Russia and cooperates with 200 universities all over the world. It has nine museums, the most important of which is the Museum of Egyptian Antiquities.

After the honoring, Hawass gave a lecture on the recent archaeological discoveries in Egypt.