In Pics: The miraculous transfer of Abu Simbel Temples in 1968 CAIRO - 22 September 2021: On this day, September 22, 1968, the transfer works for Abu Simbel Temple were completed. The temple was carved in the mountains and dates back to the reign of King Ramses II in the 13th century BC.


The temple resembles a memorial of King Ramses II him and Queen Nefertari and it commemorates the king's victory in the Battle of Kadesh.


It consists of two temples; the largest is dedicated to three deities of Egypt at that time, Re-Hor-achti, Ptah, and Amun. Four large statues of Ramses II are featured on the façade, and the smaller temple is dedicated to the Godess Hathor.


The Temple of Abu Simbel was forgotten until 1813, when the Swiss orientalist J.L Burckhardt found the main temple promenade. He spoke about this discovery with Italian explorer, Giovanni Pellonzi, and travelled together to the site. However, they could not dig the entrance to the temple.


Pellonzi returned in 1817, but this time he successfully entered the temple, taking every valuable object he could carry with him.


In 1960, the temple was completely moved to another location on an artificial hill of a dome-like structure above the High Dam reservoir in Aswan. It was necessary to move the temples to avoid their drowning during the construction of Lake Nasser and the formation of a huge artificial water tank after building the High Dam in Aswan on the Nile River.


Furthermore, an international fundraising campaign to save the temple began in 1964. The cost of this process totaled up to $40 million, between 1964 and 1968. The whole site was cut into large blocks (up to 30 tons and on average 20 tons). It was dismantled and reinstalled in a new location at a height of 65 m and 200 m above the river level.


The transfer process is considered by many as a miraculous archaeological engineering move. 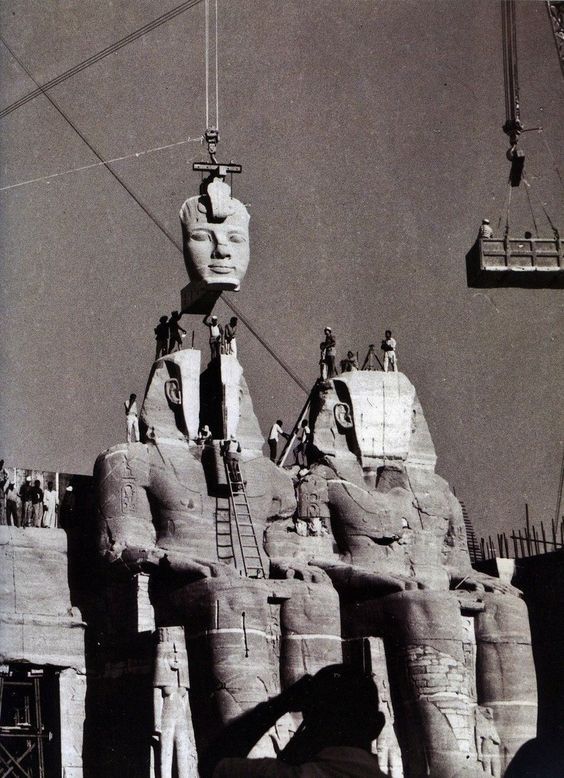