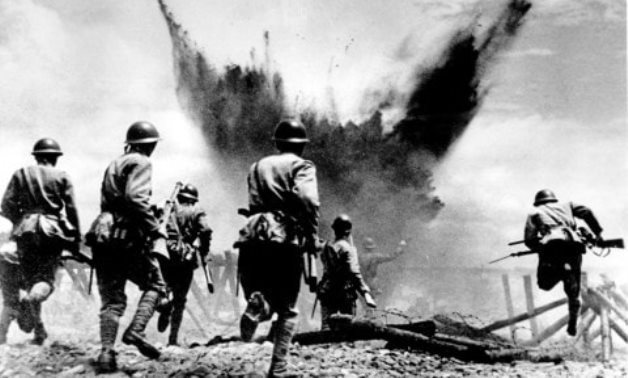 CAIRO – 2 September 2021: Today marks the 76th anniversary of the end of World War II on September 2, 1945, after the declaration of the surrender of the Empire of Japan.

The Japanese government had agreed to terms of surrender to the Americans by radio on August 14 at 7 p.m. provoking huge celebrations for the end of the war.

The Second World War actually began on September 1, 1939, with the German invasion of Poland. The United Kingdom and France declared war on Germany two days later. Some 100 million people participated in the war, and put all their military, economic, industrial and scientific capabilities at the service of the war.

World War II left behind between 50 and 85 million dead people, according to statistics, and is considered the bloodiest war in human history.

In fact, World War II ended in Europe twice, as the Soviet Union did not accept this agreement, and wanted a complete and final signature in the German capital to be signed by General Georgy Zhukov. Dwight D. Eisenhower, Supreme Allied Commander, agreed, and the final signature was set the next day.

Indeed, Wilhelm Keitel, Hans-Georg von Friedeburg and Hans-Juergen Stumpf signed the surrender of Germany in the ruins of Berlin.

Victory Day is celebrated on two days in Europe. There was supposed to be a news blackout after Reims' signature so that the celebrations could take place around the world at the same time.

However, a reporter broke the ban and broke the news to the festivities in the West on May 8, before the official announcement of defeat was made, which was broadcast later that night - just before the signing of Berlin.

Thus the West celebrates May 8, but the Soviet Union celebrates victory on May 9, when the signature of Berlin came into effect.

Winston Churchill announced from Room 10 of the Cabinet that the war with Germany was over. He said that a ceasefire was signed the day before at the American advanced headquarters in Reims, and paid tribute to the men and women who gave their lives for victory, as well as all those who “fought valiantly” on land, sea and air. He made it clear that the unconditional surrender was due to be ratified in Berlin today (May 8) - but in order to save lives, the ceasefire went into effect the day before (May 7).

The Japanese Empire surrendered on September 2, 1945, by signing its unconditional surrender on board the USS Missouri and was broadcast worldwide, after Hiroshima and Nagasaki were hit with nuclear bombs on August 6; the war ended once and for all.

Some consider that the war really ended with the armistice that began on August 14, not with Japan's declaration of surrender.

The peace treaty was signed in 1951 after discussions of details, which include compensation for prisoners.

Despite this, Japanese soldier Hiro Onoda was waiting in the jungles of the Philippines for new instructions from his commander until March 9, 1974.