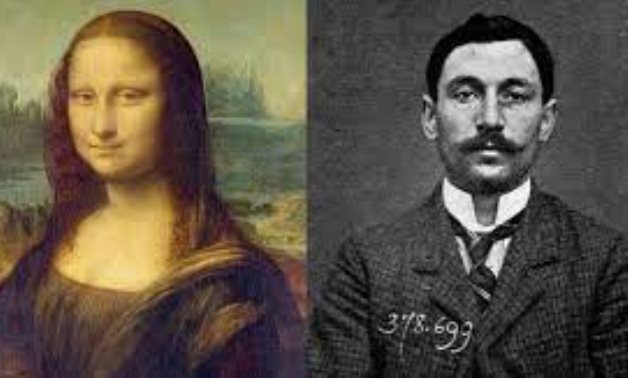 CAIRO – 22 August 2021: On August 22, 1911, the Mona Lisa, one of the most famous international paintings of the Italian artist Leonardo da Vinci, disappeared, causing a great uproar in the world.

The thief is the Italian Vincenzo Peruggia (October 8, 1881 - October 8, 1925), who used his work in the Louvre, as a restorer of the frames of paintings in the museum, to steal the Mona Lisa.

As for how this happened, Peruggia had long thought about stealing the painting, and when he decided, he put on a coat so that he could hide the painting. He left his house to go to work, and before the appointed time for the employees to leave, he stood in a far corner watching passers-by to see if anyone was still there.

Once he made sure that the museum had been fully evacuated, he stole it, put it under his coat, and simply walked through the exit gates.

Of course, no one suspected Vincenzo Peruggia, since he was one of the museum empolyees.

While walking to his house, he dreamed of getting rich and how much he would earn after selling the Mona Lisa, until he entered his house and kept contemplating the painting. He kept the painting in his house for two years.

After Geri made sure the painting was indeed the real Mona Lisa, he contacted the Italian authorities and tipped them about the robbery. The Italian police managed to arrest Perrugia, and placed the painting in the Bouvier Gallery, which pleased the Italians.

When France learned about this incident, diplomatic negotiations took place between with Italy, and diplomatic relations were at stake. France insisted that Italy return the painting and with it the thief so that France would prosecute him.

Italy handed over the painting to France, and Peruggia was sentenced to a year in prison.