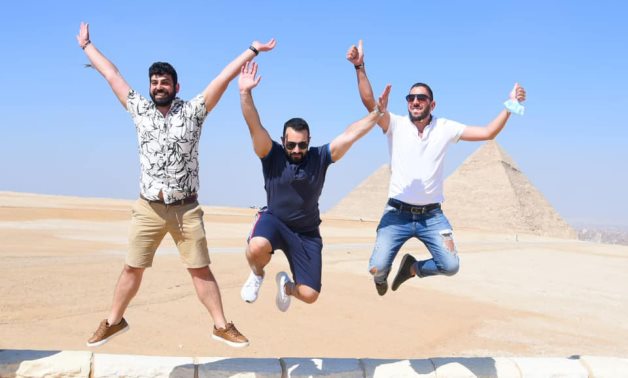 During the visit to the Great Pyramids of Giza - Min. of Tourism & Antiquities

CAIRO – 15 July 2021: The Great Giza Pyramids’ area and the National Museum of Egyptian Civilization in Fustat hosted a delegation of Egyptian, Greek and Cypriot youth, as part of the activities of the youth edition of the presidential initiative "Reviving the Roots NOSTOS".

The delegation visited the Great Giza Pyramids, the Sphinx and the National Museum of Egyptian Civilization in Fustat, to learn about the history of Egypt through the ages. During the tour to the NMEC - Min. of Tourism & Antiquities

In the Pyramids’ area, the youth listened to a detailed explanation of the history of the pyramids and the greatness of their kings, and the way they were built, especially the Pyramid of Cheops, a legendary edifice and one of the seven wonders of the ancient world. During the tour to the NMEC - Min. of Tourism & Antiquities

During the tour, the youth were keen to take memorial photos in front of the Pyramids and the Sphinx, and expressed their happiness to visit this great archaeological place. They considered the visit a wonderful opportunity to learn about a side of the ancient Egyptian civilization, and the grandeur of the Pyramids that amaze the world. During tour to the Great Pyramids of Giza - Min. of Tourism & Antiquities

Also, the youth were fascinated by the greatness of the ancient Egyptian civilization in all its details while touring all parts of the National Museum of Egyptian Civilization, which has gained wide international resonance since its opening and its reception of the royal mummies in a solemn procession in April 2021.

It is worth noting that the Ministry of Tourism and Antiquities is keen to utilize international events and tournaments that are held in Egypt in promoting tourism to Egypt, by granting free visits to all delegations and teams participating in these events to learn about Egypt's unique archaeological sites.