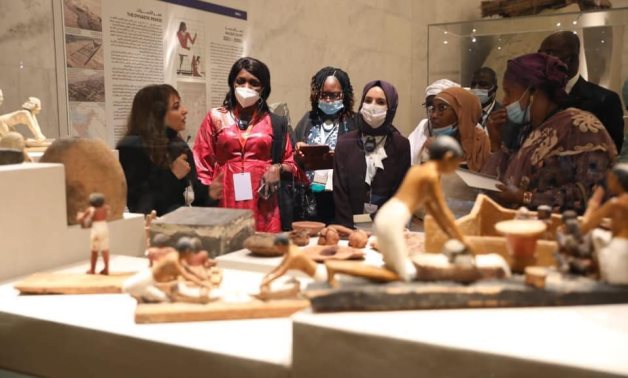 During official visits to the NMEC - Min. of Tourism & Antiquities

CAIRO – 12 July 2021: The National Museum of Egyptian Civilization continues to receive ministers, officials and public figures from Egypt and all over the world.

Over the past three days, the museum witnessed a number of visits and events, including the celebration organized for the participants in the eighth Ministerial Conference of the Organization of Islamic Cooperation for Women, which was hosted by Egypt.

The guests were received by Vice President of the Museum Authority for Administration and Operation Fairouz Fikri.

The museum also received the Iraqi Minister of Labor, the Syrian Minister of Awqaf [Endowments] and the delegation accompanying them, in addition to the Ministry of Communications' guests who participated in one of the training courses organized by Egypt for our African brothers in the field of communications and information technology.

These delegations were taken on a tour at the museum, where they got acquainted with its distinguished holdings. The delegations expressed their happiness with the distinguished archaeological treasures, and the royal mummies that were transferred from the Egyptian Museum in Tahrir in a solemn procession.

For his part, CEO of the Museum Authority Ahmed Ghoneim indicated the museum’s keenness to receive visitors of all  nationalities, and to make their visit memorable, to achieve the museum’s role as a cultural beacon that introduces the greatness and uniqueness of Egyptian civilization throughout the ages.