Luxor's ‘Lost Golden City’: An accomplishment of the Egyptian expedition in April 2021 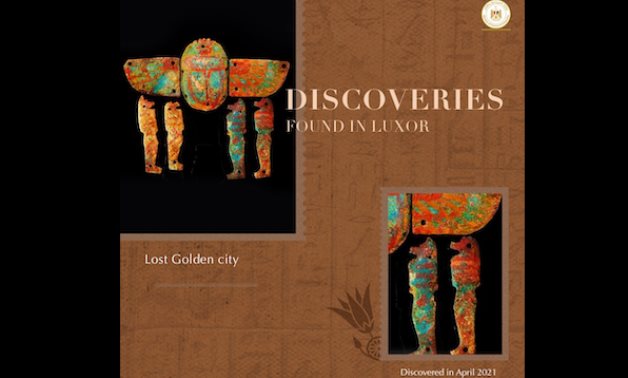 Discoveries of Egypt's Luxor in 2021 - Min. of Tourism & Antiquities

CAIRO – 1 July 2021: The Egyptian expedition discovered a massive city founded by one of the greatest rulers of Egypt, king Amenhotep III, the ninth king of the 18th Dynasty who ruled Egypt from 1391 to1353 B.C.

This city was active during the great king’s co-regency with his son, the famous Amenhotep IV (Akhenaton). It was the largest administrative and industrial settlement in the era of the Egyptian empire on the western bank of Luxor.

In the photo, some of the artifacts discovered are visible.

Secrets of Luxor’s “Golden Lost City” are still being unearthed. The city is dubbed the “Rising of Aten” and was discovered by renowned archaeologist Zahi Hawass, head of the Egyptian mission in the west of Luxor.

The city includes a series of houses which confirms that the western mainland had life in it, and not all burials, as it was always believed.

The city spans back to the reign of the greatest king of Egypt, King Amenhotep III, who ruled Egypt from 1391 BC.

Archaeologist Al-Tayyeb Mohammad said that among the most prominent findings in Luxor’s Lost City is a group of meat preservation vessels, with the name of the butcher and the name of the slaughterhouse and its weight recorded on them. A vessel containing two gallons of dried or boiled meat (10.5 kg) had inscriptions on it that can be read.

Mohammad further explained that the mission also found an inscribed text on the imprint of a seal that reads: Aten’s County. This is the name of a temple built by King Akhenaten at Karnak.

Also, a large tomb was discovered, the dimensions of which have not yet been determined. The mission discovered a group of tombs carved into the rocks of various sizes, which can be accessed through stairs carved in the rocks.

Work is still in progress and the mission expects to uncover untouched graves full of treasures.