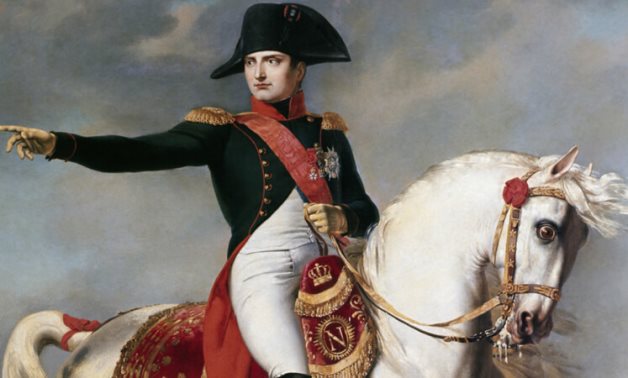 CAIRO – 15 June 2021: Napoleon Bonaparte is one of the most instantly recognizable icons in the world.

In many drawings, he is usually depicted with his hand inside his vest. He was said to be short and aggressive. It is believed that short men tend to compensate for their lack of height with tyrannical behavior and aggression.

In fact, three French sources—his servant Louis Constant Wairy, his personal physician François Carlo Antommarchi, and General Gourgaud, —said that Napoleon was just over 5 feet tall which equals about 1.69 meters, according to the History website.

If Napoleon was of an average height, where did the myth of him being short come from?

British printmaker James Gillray (1756-1815) painted a portrait of the French general which illustrated him as being short.

This painting was so popular and poignant that Napoleon said at the end of his life that Gillray had "done more than all the armies of Europe to bring me down."

It is worth noting that Bonaparte's worst defeat came when he tried to invade Russia in 1812. With more than 400,000 soldiers, Bonaparte succeeded in capturing Moscow, but the victory was short-lived. Much of the city was destroyed, and with supplies running out, Bonaparte was forced to retreat. Many men were lost during the retreat to harsh winters, malnutrition, disease, and Russian attacks.

By 1813, Bonaparte was on the defensive, as forces from Russia, Great Britain, Spain, Austria, and Prussia gradually pushed his forces toward France.

In 1814, forces from those countries invaded France, reached Paris in April, forced Bonaparte to abdicate, and sent him into exile on the Mediterranean island of Elba.