CAIRO – 8 April 2021: The Egyptian mission headed by former Minister of Antiquities Zahi Hawass and jointly between the Zahi Hawass Center for Egyptology affiliated to the Bibliotheca Alexandrina and the Supreme Council of Antiquities, discovered the lost city under the sand, which was called “So’oud Atun” [Ascension of Atun].

Its history spans back to the reign of King Amenhotep III. The city continued to be used by King Tutankhamun, that is, 3000 years ago.

Hawass said that work began in this area to search for the funerary temple of King Tutankhamun, because the temples of Horemheb and Ay had been found before. Moreover, Hawass confirmed that the mission found the largest city ever in Egypt, which was founded by one of the greatest rulers of Egypt, King Amenhotep III, the ninth king of the Eighteenth Dynasty.

He ruled Egypt from 1391 until 1353 BC. His son and future heir to the throne, Amenhotep IV, "Akhenaten", shared the last eight years of his reign.

Hawass added that this city was the largest administrative and industrial settlement in the era of the Egyptian Empire on the West Bank of Luxor where houses were found, some of which were about 3 meters in height. It was also divided into streets.

"We have uncovered a part of the city extending to the west, while Deir el-Medina is part of our city," said Hawass.

Excavations began in September 2020. Within weeks, formations of mudbrick began to appear in all directions. The mission was astonished when it was discovered that the site is a large city in good condition, with almost complete walls and rooms full of tools of daily life.

The archaeological layers have remained intact for thousands of years, and the ancient inhabitants left them as if they were yesterday.

The discovery of this city not only gives us a rare glimpse into the life of the ancient Egyptians in the era of the empire, but it will also help us shed light on one of the greatest mysteries in history and why Akhenaten and Nefertiti decided to move to Amarna ?!

The Egyptian mission began working in this area in search of the funerary temple of Tutankhamun. It was King Ay, the successor to Tutankhamun, who built his temple on a site that was later adjoined on its southern side with the Temple of Ramses III in Medinet Habu [Habu City].

The first objective of the expedition was to determine the history of this city, as hieroglyphic inscriptions were found on the ceramic lids of wine vessels.

Historical references tell us that the city consisted of three royal palaces of King Amenhotep III, in addition to the administrative and industrial center of the empire. A large number of archaeological discoveries have confirmed the history of the city, such as rings, scarabs, colored pottery vessels, and the mud bricks bearing the cartouche seals of King Amenhotep III.

After just seven months of excavation, several areas or neighborhoods of that city were uncovered. In the southern part, the mission found a bakery, cooking area and food preparation area complete with ovens and clay storage vessels, which was serving a large number of workers and employees.

As for the second area, which has been partially disclosed, represents the administrative and residential district, as it includes larger units with good organization. This area is fenced by a zig-zag wall, with only one entry point leading to interior corridors and residential areas.

This single entrance suggests it was a kind of security in terms of being able to control entry and exit into closed areas.

Winding walls are a rare architectural element in ancient Egyptian architecture, and were used mainly around the end of the Eighteenth Dynasty.

Furthermore, the third area is the workshop. On one side, it includes a production area for the mudbricks used to build temples and annexes. The bricks contain seals bearing the cartouches of King Amenhotep III.

A large number of casting molds have been discovered for the production of amulets and delicate decorative elements. This is another testament to the widespread activity in the city to produce the decorations of both temples and tombs.

Throughout the excavation areas, the mission found many tools used in industrial activity, such as spinning and weaving. Metal and glass rubble were also discovered, but the main area of such activity has yet to be discovered. Two uncommon burials of a cow or bull were also found inside one of the rooms. Research is still underway to determine the nature and purpose of these burials. A wonderful burial of someone was also found, with his arms stretched out next to him, and the remains of a rope wrapped around his knees. The location and position of this skeleton is somewhat strange, triggering a more in-depth research into this finding. 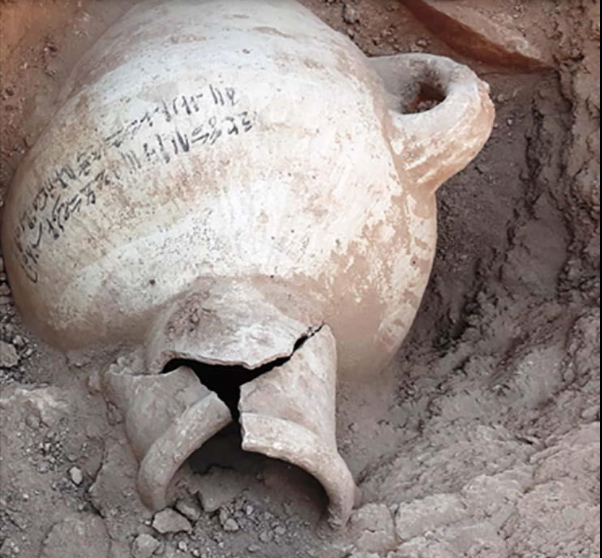 Also, a vase was found containing two gallons of dried or boiled meat (about 10 kg) and bore valuable inscriptions that could be read.

This valuable information not only gives us the names of two people who lived and worked in the city, but also confirms that the city was active and determines the time of the participation of King Amenhotep III with his son Akhenaten.

The mission also found a text inscribed on the imprint of a seal that reads: Province of Atun the Great. This is the name of a temple built by King Akhenaten at Karnak.

Ongoing excavations give archaeologists access to the city's original layer of activity, as information has been unveiled that will change history and give us unique insight into the Tutankhamun family.

The discovery of the lost city will also give us a deeper understanding of the daily life of the ancient Egyptians in terms of the style of buildings and decorating their homes, the tools they used and how they organized their work.

Only a third of the area has been uncovered so far, and the mission will continue excavations, including the area identified as the potential site of Tutankhamun's funerary temple.

Hawass concluded that we have a lot of information about tombs and temples, but this is the first time that they reveal secrets about the lives of the kings of the golden age of Egypt.