Behind the Scenes: Decoration of Egyptian mummies’ parade carts took 2 years, witnessed delay due to COVID-19 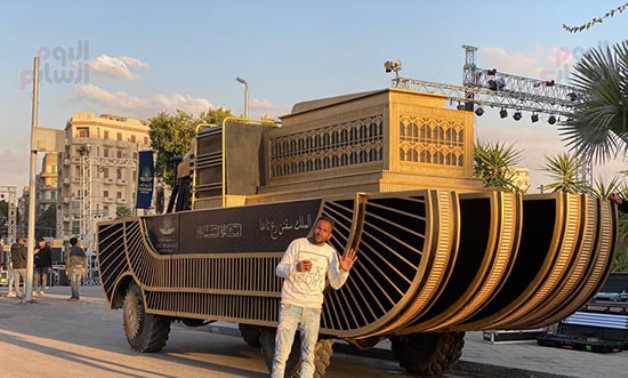 CAIRO – 5 April 2021: On April 3, the world watched eagerly the historic event of the transfer of 22 Egyptian pharaonic mummies from the Egyptian Museum in Tahrir Square to their new resting place at the National Museum of Civilization in  Cairo’s Fustat city.

Mummies of 18 kings and four queens were transported by road in beautifully- designed carts that hosted the mummies’ capsule filled with nitrogen to provide protection.

Hussein Bakheet, 33 yrs, participated in executing the decoration of the carts that transported the mummies in the parade.

Bakheet is from Qous village in Upper Egypt’s governorate of Qena, where he studied at the Faculty of Commerce. He has worked in decoration since he was 13 years old.

“The design of the mummies parade took two years to be accomplished, and the implementation was halted before due to Coronavirus spread,” Bakheet said.

He explained that the final touches, the lighting and the accuracy of the design were among the challenges he faced while working on the parade carts.

Bakheet was among a large group who participated in implementing the design, and worked in full swing to finalize the work on time, under the supervision of interior designers.

The parade was not the first project for Bakheet to take part in, as he also participated in implementing the decoration of the inauguration of the New Administrative Capital’s mega-mosque and Mideast’s largest cathedral.