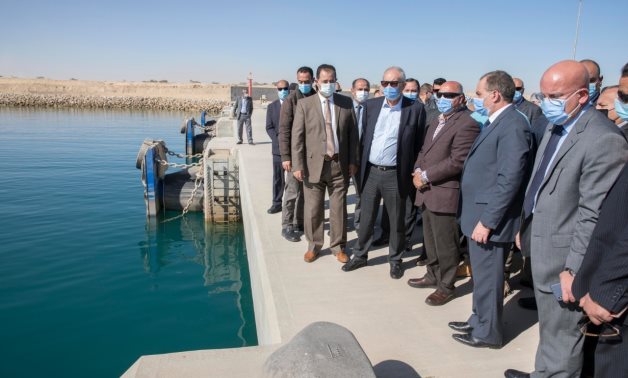 Minister of Transportation Kamel al-Wazir checking up the upgrade works carried out in Ain Sokhna Port on February 2, 2021. Press Photo

CAIRO – 2 February 2021: Minister of Transportation Kamel al-Wazir checked up the upgrade works carried out in Ain Sokhna Port at a cost of LE20 billion as it should be turned into a regional logistics center. The upgrade is taking place in tandem with the construction of the electric railway stretching from the port lying on the Red Sea to Alamein City located on the Mediterranean. Such works are planned to be completed in two years along with the launching of the high-speed electric train while the pilot phase of the LRT will begin in October 2021.

The railway consists of a high-speed passenger train, an LRT extending between Al Salam City and 10th of Ramadan City, and a cargo train. The three lines pass through the New Administrative Capital.

On January 13, the Ministry of Transport represented by the National Tunnels Authority signed a memorandum of understanding (MoU) with Siemens to implement an integrated system for the express electric train in Egypt.

The total length of the railroads to be extended within the project is 1,000 kilometers, and the total cost is LE360 billion. The distance between Ain Sokhna and Alamain is 460 kilometers.

German Siemens’s CEO Joe Kaeser said the new high-speed electric train project that the company will implement in Egypt will help provide 15,000 job opportunities in the field of construction in its first phase.