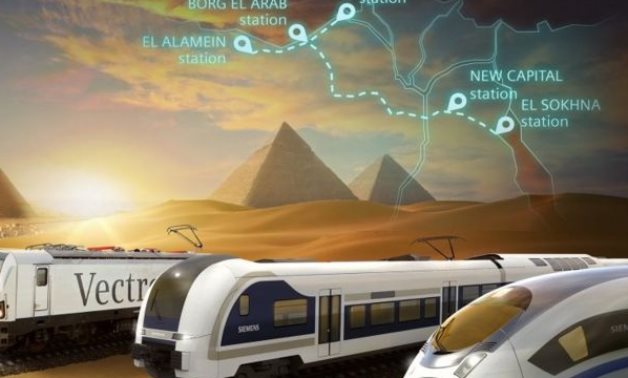 CAIRO – 19 January 2021: In two years, Egypt will have an express electric train connecting new urban communities and the Red Sea to the Mediterranean for the first time at a L.E. 360 billion cost. Such a high figure has drawn an expected controversy.

The new railway will be executed by Siemens over a 1,000-kilometer network at a train speed of 250 kilometers per hour. The project has three phases.

The first phase is of 460 kilometers for L.E. 47 billion and will be inaugurated in two years. It will have 15 stations and is meant to facilitate the movement of people and goods, as well as create job opportunities. It starts from Ain Sokhna on the Gulf of Suez and ends at New Alamein City on the Mediterranean, passing through the Administrative Capital, Giza, 6 October City, Matrouh, Alexandria, and Beheira.

On social media, criticism mainly touched on other venues for the huge sum, such as the health sector, or upgrading the old railways in mainland Egypt, and accused the project of serving the rich because the Mediterranean and Red Sea resorts as well as the new urban communities mainly host well-off populations.

Even billionaire Naguib Sawiris said in a tweet that the line should have been from Hurghada, a destination more popular than Alamein at this time. Transport Minister Kamel al-Wazir told MBC Misr T.V. channel sarcastically responded saying Sawiris’ comment reflects the businessman’s desire to promote his resort, al-Gouna, in Hurghada. He added that the train will go to Hurghada, but if he wants a station in Gouna he would need to pay for it. He continued that the money would be paid over 20 years.

But that criticism overlooked the second and third phases, which crosses the mainland. The minister also explained that the train will turn coastal cities into permanent residences, rather than summer holiday destinations and ghost towns in the winter. Mediterranean and Red Sea ports will enhance trade when connected. Workers who go to new cities and industrial areas surrounding Greater Cairo will move without creating traffic on highways and in much less time.