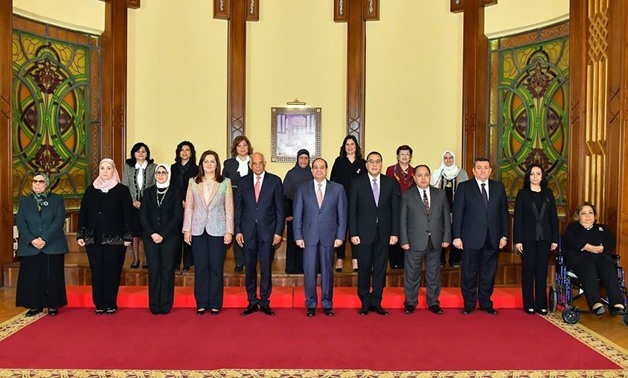 CAIRO – 22 March 2020: Egyptian President Abdel Fattah al-Sisi on Sunday announced in full the country’s economic plan, in face of the novel coronavirus, as he read out loud a number of economic decisions, while marking the national Women’s Day.

This is considered to be Sisi’s first public comments on coronavirus, since it started in Egypt. He gave the remarks in a meeting with a number of Egyptian women, as well as Prime Minister Mostafa Madbouli and some other ministers including Health Minister Hala Zayed.

CAIRO - 22 March 2020: Egyptian President Abdel Fattah al-Sisi on Sunday called on citizens to show "further discipline" and to comply by health instructions while dealing with the coronavirus crisis, as Egypt has by Saturday reported a total of 294 cases of coronavirus.


Among the decisions are reducing electricity prices for the industrial sector by 10 piastres ($0.0064), decreasing natural gas prices for this sector by $4.5 and providing LE 1 billion ($63.9 million) to exporters during March and April, to pay part of their dues.

Sisi announced adjourning the payment of the real estate tax imposed on factories and tourist facilities for three months and stopping administrative seizure against taxpayers, in return for 10% of the tax due on them.

The decisions also include decreasing the interest rates of the Central Bank of Egypt by 3%, while providing the credit limits required to finance the share capital, and also adjourning credit entitlements of the small, medium and micro businesses for six months.

The economic plan exempts foreigners from capital gains taxes forever and postpones the payment of these taxes imposed on residents until 2022.

It also includes providing necessary support to the sectors that are most affected by coronavirus, launching an initiative to back workers impacted by losses in the tourism sector and funding hotels by up to LE 50 billion ($3.2 billion).

According to the President, the government decided to include the five bonuses due for pensioners by 80 percent of the basic wage, in addition to granting the annual periodic bonus to pensioners to be 14 percent as of next fiscal year.

It was also decided to extend the moratorium on the tax law on agricultural land for a period of two years.

The decisions include allocating LE 100 billion ($6.39 billion) to fund a comprehensive coronavirus strategy, LE 50 billion ($3.2 billion) to fund real estate development for middle-class people through banks and LE 20 billion ($1.28 billion) from the Central Bank to fund the Egyptian Bourse (EGX).

According to the decisions, there will be no additional fines on late payment.

Nine new coronavirus cases were detected on Saturday, all of them are Egyptians, who were in contact with positive cases, the Health Ministry said.

Two more deaths were confirmed; raising the total number to 10.

The new fatalities were a 68-year-old Egyptian woman and a 75-year-old man. Both of them are from Giza governorate.

Up to 41 coronavirus patients have totally recovered so far, the ministry spokesman said.

In order to curb the spread of the deadly virus, the state decided to close all mosques and Islamic places of worship across Egypt for two weeks starting from March 21, 2020. Also, Pope Tawadros II of Alexandria announced a temporary closure of all churches, and the suspension of all rituals and activities.

In streets, the Egyptian Cabinet ordered the closure of all restaurants, cafes, cafeterias, casinos, night clubs, bars, shopping centers (malls), and other local shops will shut down from 7:00 pm (Cairo time) to 6:00 pm across the nation. The decision excludes pharmacies, bakeries, grocery stores, supermarkets, and the delivery service.