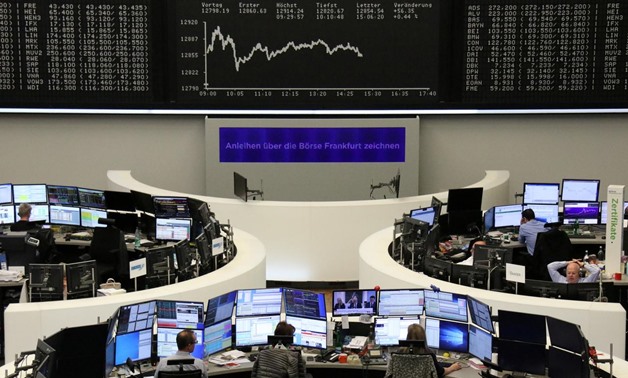 By 0930 GMT, the pan-European STOXX 600 index was down just 0.1%, with banks .SX7P leading losses after disappointing results from some of the region’s top lenders.

Deutsche Bank (DBKGn.DE) fell 6%, putting it at the bottom of the benchmark index, as it reported a loss for the second consecutive quarter due to the costs of its wide-ranging global restructuring.

“The losses were massive, so it’s no surprise that investors aren’t too happy,” said Connor Campbell, financial analyst at Spreadex. “Even though the CFO’s tried to say that earnings are a little bit better than in the interim planning, it’s enough to spook investors.”

The euro zone’s biggest lender, Santander, (SAN.MC) slid 2% as net profit fell 75% due to one-off charges in the UK, while Swiss lender Credit Suisse (CSGN.S) lost over 3% after issuing a cautious 2020 outlook.

Expectations had been low going into the European corporate earnings season, and after three weeks the overall picture has proved better than expected, with most companies modestly beating estimates.

Trade-sensitive tech .SX8P and commodity-linked stocks .SXPP took a hit on Wednesday as concerns over the U.S.-China trade pact resurfaced after a U.S. administration official told Reuters the deal might not be completed in time for the leaders of the two countries to sign in Chile next month.

Auto stocks .SXAP hit their highest level in nearly six months after Italian-American carmaker Fiat Chrysler (FCHA.MI) confirmed it was in merger talks with French rival PSA (PEUP.PA) on a deal that would reshape the global industry.

Shares of both companies rose between 7% and 8%, with Peugeot hitting an 11-year high. Shares in another French carmaker, Renault (RENA.PA), which was in talks with Fiat earlier this year about a similar deal, slid 3.5%.

“The deal is geographically complementarily given FCA’s strong hold in North America and PSA’s footing in Asia and (the) rest of the world,” Martino De Ambroggi, senior equities analyst at Equita, wrote in a note.

Oslo-listed stocks .OSEAX got a boost from a near 2% rise in the world's largest fish farming company Mowi (MOWI.OL) which plans to increase its production by 4.7% in 2020.

All eyes will move later in the day to the U.S. Federal Reserve’s latest announcement on interest rates, widely expected to cut borrowing costs for the third time this year and offer more signals on the path ahead.