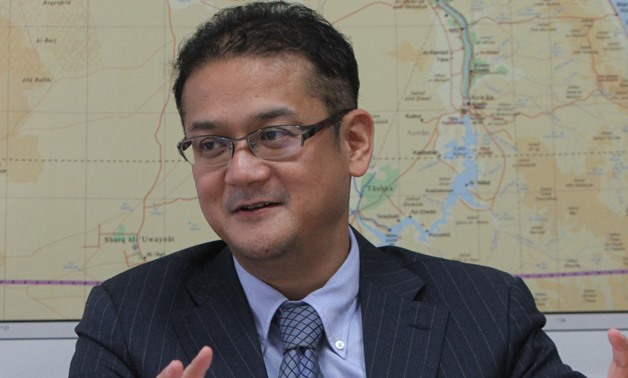 Strong and historical relations dating back to the 19th century make Egyptian- Japanese ties truly significant. When the first Japanese expedition mission came to Egypt in 1860s, both countries were witnessing major political shifts. Japan was aiming to modernize and implement open state, while Egypt was also facing its own challenges.

Bilateral ties have witnessed ups and downs over the years, amid the challenges both countries have faced; and now is the right timing to enhance and strengthen these relations, according to Japan International Cooperation Agency (JICA)’s Egypt Office Chief Representative Yoshifumi Omura.

Ahead of the seventh Tokyo International Conference On African Development (TICAD 7), to be held in Yokohama City in Japan between August 28 and 30, Business Today Egypt sat down with Omura to discuss the agenda and priorities of the conference, as well as the bilateral ties between Egypt and Japan in different sectors and JICA’s recent initiatives and projects. 
Since the establishment of JICA’s office in Cairo in 1977, the two countries have been cooperating economically in several sectors. How do you see the Egyptian-Japanese relations and what can you tell us about JICA’s financial assistance to Egypt in terms of grants and loans?

Egypt is a great nation, located in a geopolitically important position, linking the Middle East, Africa and Europe. Given this, strengthening Egypt’s stability and development as well as its constructive role in the region is important for the regional peace and stability.

Moreover, with a large young population, Egypt’s labor force and market are also attractive for Japanese businesses, with about 50 Japanese companies expanding their operations here.

In terms of recent diplomatic relations between both countries, following Japanese Prime Minister Shinzo Abe’s visit to Egypt in January 2015 and President [Abdel Fattah] al Sisi’s visit to Tokyo in 2016, both leaders announced a “Japan-Egypt Joint Statement,” namely cooperation for a new stage in bilateral relations especially in the electricity, education and health fields.

In 2018, JICA President Shinichi Kitaoka paid a visit to Egypt, where he held meetings with President al Sisi, visited JICA’s project’ sites including the Grand Egyptian Museum (GEM) and signed an ODA loan agreement for the Egypt-Japan School Support Program

In total, JICA has provided around $1.5 billion in grant aid and financed 42 projects with an ODA loan, leading to an aggregate of nearly $6.5 billion. Technical cooperation amounted around $800 million. Tell us about JICA’s initiative, in cooperation with Bibliotheca Alexandrina, regarding print disability?

Most of the print-disabled people can actually struggle with reading for many reasons, facing difficulties in understanding what they read. We are developing our education to make them understand complex problems more easily, without the need for the text itself.

We are also currently working on changing our policy in elementary schools from the ordinary text-style into another style, depending on the different methods to make information more understandable for the students, especially the 10% who suffer from disabilities.

Basically, Japan could be identified as one of the leading countries that contributed to this “adaptation initiative,” aiming to help print- disabled people internationally. Also, Egypt can gain from this experience, since Arabic is relatively similar to Japanese in terms of writing style.

Japan has also played a key role in the construction of The Grand Egyptian Museum (GEM), slated to open its doors in 2020. What can you tell us about Japan’s participation in this project?

The majority of Japan’s participation in GEM is regarding the museum’s restructuring process itself. We also played a key role regarding the transmission and restoration of the artifacts. According to Egyptian officials, we are the first expedition allowed into the museum’s core.

Egyptian officials see us as a fair and neutral party that can participate in the museum or education or any other sector without having any hidden intentions or motivations. Japan by itself could be an isolated country away in the oceans if we hadn’t built good relations and friendships with other countries.


Education is one of the major fields that both Egypt and Japan have agreed to cooperate in. The Japanese schools in Cairo are a primary example; how do you evaluate this experience thus far?

Prime Minister Shinzo Abe held summit discussions with President Sisi regarding these schools. One hundred schools are supposed to open according to the agreement. Last year, we opened 35 institutions and next year we are planning to open five more, which means that the total number will reach 40 schools. And of course, we expected to face some difficulties and problems in the beginning because the whole idea is new and has a novel approach. But so far, I can say that the experience is pretty much successful despite of everything that happened while setting up the process since last year. The process doesn’t just include establishing those projects, but also changing people’s mindsets regarding the education system in Egypt.

Among the difficulties that we were trying to solve in Egypt is that classes are at over capacity, so we thought that this could affect the students’ understanding. But the Japanese schools teach how to be organized and independent through a number of activities.

The whole change would be about the system not the education materials because materials are based on the country itself. For example, what president Sisi admired when he visited elementary schools in Tokyo during his visit was the organization of the students and how they were very clean, then, he asked us to provide coordination with the Egyptian government on this regard [to implement a similar system].


Japan is also interested in agriculture and irrigation in Egypt as part of its goal to reduce poverty and enhance living standards. How does JICA support Egypt in this sector and what are the trainings JICA has been offering for small-scale farmers and women?

As a matter of fact, we envy Egyptian farmers because they can make anything they want with- out much effort. They have all what they need at any time; and yet, the country is suffering. This is simply because they are using the same traditional way their ancestors have been using long time ago. They do not use any new technologies.

You cannot keep depending on the same products, at the same time by the same way!

What farmers just need is to change their mindsets and start farming new products in different sessions for example. So, if they plant in different seasons, the market rules will defiantly change.

Another challenge we faced concerning agriculture in Egypt was the Egyptian traditions, as we noticed that women in Upper Egypt tend to stay indoors most of the time; they never leave to help in field.

We have been cooperating with other countries where women are more likely to be active than men, so for three following years we didn’t succeed to change the process and Egyptians’ mindset. We needed to change mindsets to make it work out. And we started to think about how to train women through small projects; for them to make small products from home as they wish while also generating an income. 
Can you give us more details about the volunteering programs JICA has been offering in Egypt.


How does JICA support the private sector in Egypt and do you have interest in supporting the small, medium and micro enterprises sector, which has been a great interest for the Egyptian government lately?

Our sister organization Japan External Trade Organization (JETRO) is strongly supporting private sector, small enterprises and startups in Egypt. It has a focus on entrepreneurship, along with being interested in raising this market in Egypt. This year, there are some discussions taking place regarding inviting Japanese startups coming to Egypt and vice versa. I can say that my favorite startup in Egypt is Nafham.

In 2015, JICA started working with the Egyptian Financial Regulatory Authority (FRA) to support the development of micro-insurance in Egypt for financial inclusion. Later on, we started the (TOT) project, issuing the first training of trainers of this kind in the world.

This year, Japan has witnessed a number of huge events and summits, including G20; and it is hosting TICAD 7 in August. What can you tell us about these two international events?

In the 2019 G20 summit in Osaka, Sisi met with Prime Minister Shebzo Abe as they discussed the importance of maintaining the region’s safety and stability. This is our main approach regarding the region.

They also discussed a number of mega cooperation projects between the two countries, including the Egyptian Grand Museum. Other discussions were mainly about cleaning the oceans and water from plastic, as Egypt is ranked the 7th country internationally affected by the plastic crisis. We’ve been discussing using other materials similar to plastic, but way easier to get rid of and recycle.

Regarding TICAD 7, which is due for August, I’d like to say that we have no intentions to compete with any countries that came to Africa to invest in it, especially Russia and China. Both al- located huge sums to invest in it.

President Sisi will be participating in TICAD this year as the AU [African Union] head, so it is currently under discussion that he will be reviewing his opinion on how Japan is going to share its experience with Africa in facing its challenges such as health, education and culture.

But mainly, science and technology are on the agenda’s top priorities for this year’s TICAD. Also, the Egypt-Japan University of Science and Technology, in New Borg El Arab, Alexandria which was established 10 years in the past, is considered to be a hub on this regard for the region. In Kenya as well, we have the Jomo Kenyatta University of Agriculture and Technology (JKUAT). It is okay to invite students to Japan, however we think it is better to transfer our assets as well to Egypt along with Kenya to be central fixed places for Japanese experience in technology inside Africa.


Since it was first held in 1993, how do you think TICAD has benefited both the African and Japanese parties; and how do you assess the summit’s progress?

In the past, TICAD was held every five years. However, due to the rapid increase in relations, it became every three years.

Last TICAD, Japan committed $30 billion to Africa in public and private support for infrastructure development, education and healthcare expansion in the continent. We do so according to what we can offer. We also have a tendency to focus on enhancing technology and innovation.


In your opinion, what are the main African challenges that must be addressed in the upcoming TICAD?

There are 54 countries located in Africa, which vary in their problems and challenges.

With every country, during our talks and discussions with them, Japan adopts new approaches aiming to change the country’s mind- set regarding dealing with its problems. So we mostly depend on adaptation in problem solving approaches.

Mostly, we think that investment facilitation, education and health are the main and most common challenges. We suggest initiatives, but it is up to every country to adopt them as they suit to its laws, regulations and reality.