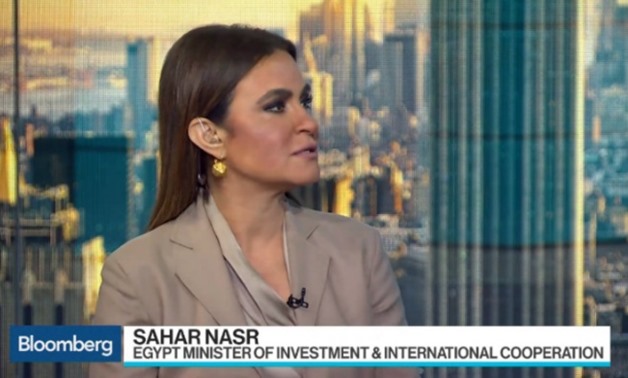 Nasr added that President Abdel Fatah al-Sisi has put a ground vision for Egypt where investment will be driven by the private sector, so it's moving with all the required reforms to ensure their application and this is reflected in the indicators.

"The rating agencies have continuously improved their ratings for Egypt and the national financial institutions have also reflected that," she noted.

"In fact,the politics in the country have helped a lot in improving the business environment , and have opened the ground for more business to come to Egypt, which is reflected on the numbers of foreign direct investment (FDI)and overall private investment," according to the minister.

She clarified that when looking at FDI in Egypt, it should be put in the international context so what is happening globally must be watched.

"Despite the slowdown of the international economy and the crunch in the emerging markets, Egypt's share of FDI continuously rises, at 4 percent right now, and Egypt is ranking among the top performing countries in the region based on the outlook by both the World Bank and IMF," she stated.

According to the minister, Egypt is attracting FDI that will create jobs, added-value to the economy that would bring in management and technology that will be export-oriented, and will be able to generate foreign currency. "That's the quality investment we are aiming for."

Regarding private investments, Nasr said that it has been picking up at 26 percent and the number of companies that have been established everyday increased 27 percent. "These numbers make us optimistic about how investment is going in Egypt."

President Sisi has put a ground vision for Egypt in terms of moving forward with a very bold and courageous economic reform program, which has been accompanied by conditional cash transfers to the social safety net, she added.

"We have a new investment law that offers all the needed guarantees to the private sector and provides tax and non-tax incentives to re-position Egypt on the global investment map," Nasr noted.

She added that the government has led major reforms like sectorial reforms on gas laws and renewable energy laws and transportation, commenting that all these new laws made a difference in the private sector, which resulted in the number of companies expanding or established.

Nasr pointed out that the Egyptian people are part of the reform program and are very supportive of it.