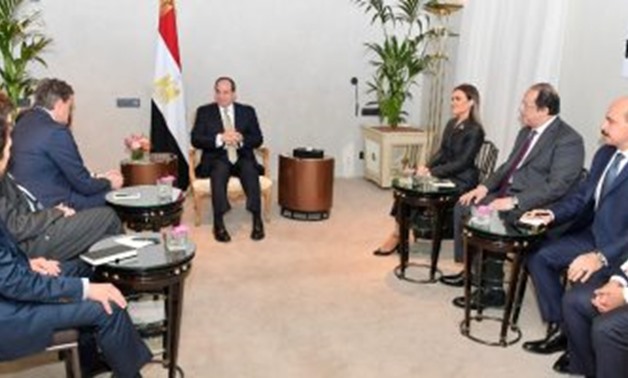 CAIRO - 17 February 2019: President Abdel Fatah al-Sisi met on Sunday with Mercedes Benz executives in Germany where he is taking part in Munich Security Conference (MSC) to discuss the resumption of its manufacturing activities in Egypt.

The president received Vice-President and Head of External Affairs at Daimler AG Eckart Von Klaeden, and Member of the Divisional Board of Mercedes-Benz Cars for Production and Supply Chain Management Markus Schäfer.

Both expressed their appreciation for the Egyptian government’s cooperation to ensure the resumption of the company’s assembly lines in Egypt. They said that the country is a big market that constitutes a doorway to other markets in the region and worldwide.

The meeting covered the company’s plans to resume assembling its vehicles in Egypt, and possible mechanisms to develop its activities to include electric cars, smart roads, transportation services in smart cities, and high-speed public transportation buses.

That is while increasing the percentage of the local component, boosting the value chain, achieving technology transfer, and expanding exports.

In 2015, Mercedes Benz announced it would shut off its assembly plants in Egypt citing the General Agreement on Tariffs and Trade (GATT) as the reason because tariffs had been gradually decreasing until they were cancelled starting this year. However, the company announced in January it would resume manufacturing activities in Egypt. The plants will be established in SCzone.