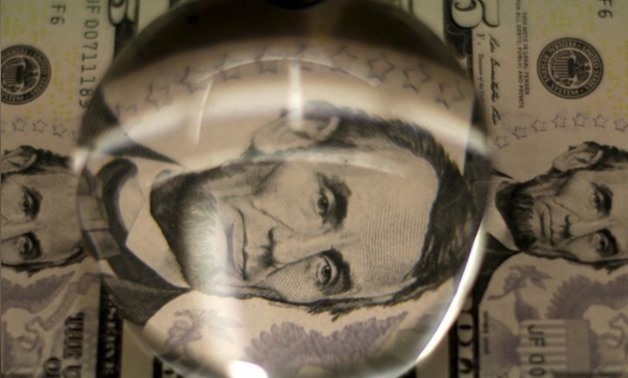 FILE PHOTO: Sheets of former U.S. President Abraham Lincoln on the five-dollar bill currency are inspected through a magnifying glass at the Bureau of Engraving and Printing in Washington March 26, 2015. REUTERS/Gary Cameron/File Photo

LONDON (Reuters) - The dollar held near a three-week high on Wednesday after the Bank of Japan left monetary policy unchanged, boosting risk appetite and sending the yen lower.

With Tokyo sounding a cautious note on the outlook for global growth, attention shifted to the European Central Bank, which meets on Thursday. Markets expect it to acknowledge growing threats to the euro zone economy.

The caution from senior policymakers comes as economic data from China to Europe shown signs of a slowdown. Traders reacted by unwinding some of their bearish dollar bets, especially against the euro.

“The ECB will likely join its global peers in striking a cautious view on growth and that should keep the dollar supported, especially with bearish expectations on the greenback such a consensus trade,” said Lee Hardman, a currency analyst at MUFG in London.

Against a basket of other currencies, the dollar was trading at 96.32, near the 96.484 hit in the previous session.

As expected, the Bank of Japan kept monetary policy unchanged. But it lowered its inflation forecast, as a larger-than-expected drop in December exports underlined the need for support for the trade-reliant economy.

On Monday, the International Monetary Fund cut its 2019 and 2020 global growth forecasts, citing a bigger-than-expected slowdown in China and the euro zone. Failure to resolve trade tensions could further destabilise the global economy, the IMF said.

European shares stumble after weak Chinese GDP data
The euro was steady at $1.1367. Sterling edged up to $1.2961 after gaining 0.5 percent in the previous session.

British Prime Minister Theresa May’s proposed agreement on terms for leaving the European Union was rejected by parliament last week in the biggest defeat in modern British history. Since then, lawmakers have been trying to resolve the crisis. No option has the majority support of parliament.

“The market is now completely discounting the prospect of a hard Brexit, though the political risk still remains in play and volatility is sure to ratchet higher if no clear path is visible to the market,” said Kathy Lien, managing director of currency strategy at BK Asset Management.