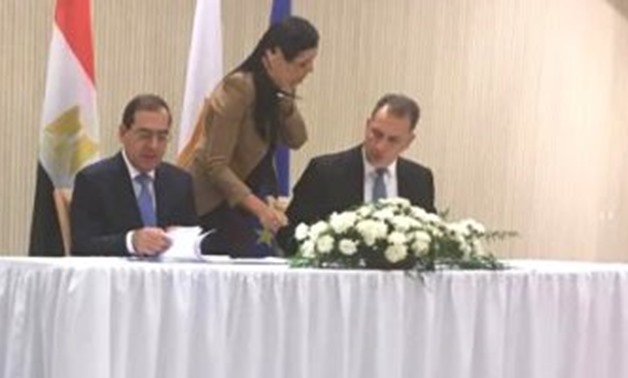 During the signing ceremony –Press Photo

CAIRO – 19 September 2018: Egypt signed an agreement with Cyprus to connect Aphrodite gas field to its liquefaction plants for re-exportation.

The agreement is considered a general framework to establish a direct sea gas line between both countries, according to spokesman of the Petroleum Ministry Hamdy Abdel Aziz.

The agreement was signed between Egyptian Minister of Petroleum Tarek el-Molla, and Minister of Energy, Industry, Tourism and Trade of Cyprus Yiorgos Lakkotrypis, in the presence of Ambassador of Egypt to Cyprus Mai Taha Khalil, and a representative of the European Commission for Energy that regulates the general framework of the agreement between the two countries.

Both countries were planning to link Aphrodite field with Egypt's liquefaction plants in Idku and Damietta after President Abdel Fatah al Sisi visited Cyprus, and discussed the construction of a pipeline to deliver gas to Egypt from Cyprus’s Aphrodite field in November.

Molla said that the Egyptian-Cypriot agreement is not only for the implementation of a sea pipeline, but will also contribute positively to the supply of gas to the European Union.

In April, Egypt signed a Memorandum of Understanding for a strategic cooperation in Energy with the European Union, stipulating to update the energy sector cooperation between both sides and implementing a clean energy transition.

He referred to the agreement as one of the main axes to support the economic relationships between both countries and an important step to maximize the benefits of Cypriot gas discoveries.

Petroleum Minister Molla emphasized the importance of the Egyptian role in the future of gas in the Middle East region with its strategic location, strong infrastructure and mega gas discoveries.

Egypt is moving towards self-sufficiency in gas and becoming the Middle East’s energy hub, with expectations to stop importing liquefied gas in 2018, after the production of its giant gas field, Zohr, began in December 2017.

In 2017, Cyprus and Egypt agreed to start discussions on an agreement to build a gas pipe from a Cypriot natural gas field to Egypt, followed by signing an agreement between Egyptian Minister of Petroleum Molla and Cyprus' Minister of Energy Lakkotrypis to transport gas from Cyprus to Egypt via a maritime pipeline.