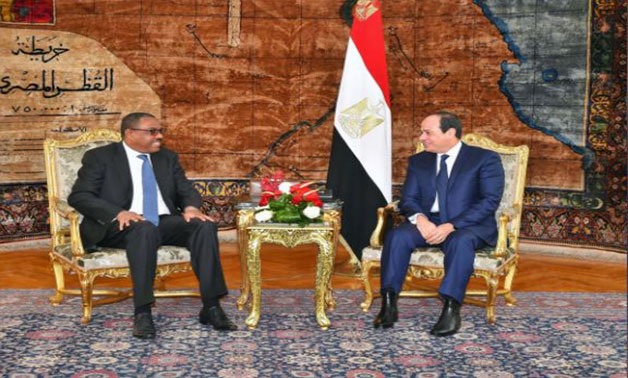 Desalegn also agreed to facilitate the procedures for establishing an oil factory that was suggested by Sakty.

This came during Desalegn’s meeting with the Egyptian-Ethiopian Business Council and a number of Egyptian and Ethiopian businessmen, on the sidelines of his official visit to Cairo last week.

The meeting was also attended by Trade Minister Tarek Kabil and Sakty, head of the Association of Investors for Small and Medium enterprises (AISME).

Sakty said that the Ethiopian Prime Minister has praised the role played by Egyptian investors in supporting Ethiopia’s economy and vowed to remove the obstacles facing them in his country.

Sakty further said that AISME is supporting the Egyptian-Ethiopian Business Council in its efforts to boost economic relations between Egypt and Ethiopia.

Ethiopian Prime Minister Desalegn arrived in Cairo on Wednesday accompanied by a high-profile delegation to attend the sixth meeting of the joint Egyptian-Ethiopian Higher Committee.

The last meeting was held three years ago and tackled bilateral cooperation in several fields, including education, health, agriculture and fisheries. Trade volume between Egypt and Ethiopia increased by 54 percent in 2009 compared to 2007.

Egyptian Investments in Ethiopia are in the fields of agricultural and livestock production, industrial, tourism and real estate, according to Egypt’s State Information Service

There are currently 72 Egyptian investment projects in Ethiopia, with many others underway.