List of agreements signed with France during President Sisi’s visit 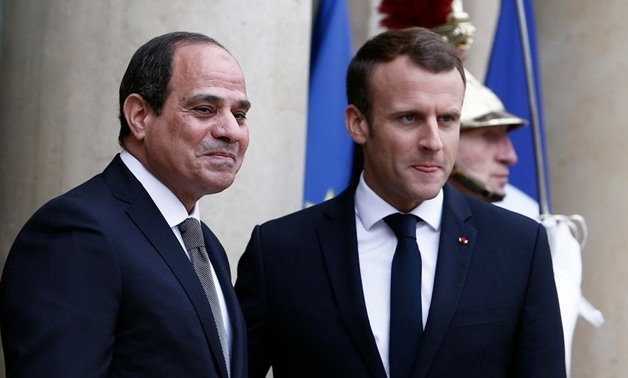 On Tuesday, Sisi and his French counterpart Emmanuel Macron held a press conference, where a number of memoranda of understanding (MoUs) and agreements, worth €400 million, were signed in a bid to boost bilateral cooperation between both countries.

List of the MoUs signed with the French side during President Sisi’s visit:
1.The signing of the executive agreement of the French Development Agency’s (AFD) loan to restore several health care centers in five Egyptian governorates.

2.The signing of the executive agreement of another AFD’s loan to restore Alexandria’s East Wastewater Treatment Plant.

3.A Joint declaration with the AFD to provide technical assistance to the Ministry of Electricity.

4. A Joint declaration with the AFD to support social protection programs in the budget.
5- The signing of an executive agreement of the FAD’s loan to support the energy sector in the Egyptian budget.

6.A joint declaration to fund the French development institution PROPARCO to establish two solar power plants in Aswan, with a capacity of 50 MW per each, through the French company EREN in cooperation with the Egyptian government.

7.A joint declaration to fund PROPARCO to establish Aswan’s two solar power plants through the French company EDF and the Egyptian government and Egypt’s el-Sewedy company.

8.A joint declaration to fund PROPARCO to establish Aswan’s two solar power plants through the French company Voltalia and the Egyptian government.

9.Letter of intent signed between both sides for France to supply 500 mobile food carts to Egypt.

10.A declaration of intent between both governments to finance the feasibility studies to develop the urban transport network in Mansoura governorate.

11.A MoU signed between RATP company and Egypt’s National Authority for Tunnels on the maintenance of the first line of the Cairo’s metro and operating the third line.

12.A declaration of intent between Egypt’s National Railways Authority and SNCF company.

13.A declaration to promote cultural, educational, scientific and technical cooperation between both states.

14.A declaration of intent to establish a French-Egyptian University.

15.A declaration to boost cooperation in the field of training leaders in Egypt’s administrative sector.

16.A declaration of intent to establish the Egyptian House in the International University City in Paris.