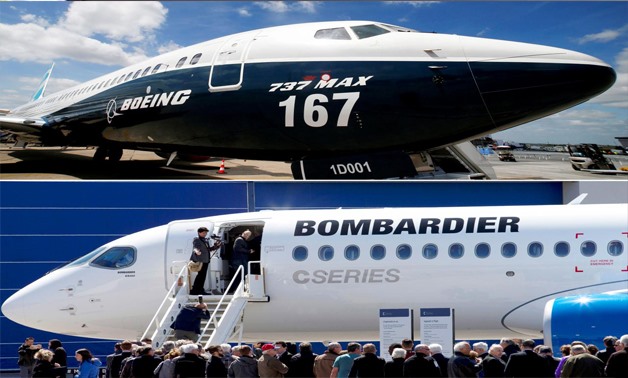 A combination photo of a Boeing 737 MAX Before the opening of the 52nd Paris Air Show at Le Bourget airport near Paris, France, and shareholders line up to view Bombardier's CS300 aircraft following their annual general meeting in Mirabel, Quebec, Canada

MANCHESTER, England - 1 October 2017: Boeing needs to get around the table with Bombardier and find a solution to its trade dispute that has put more than 4,200 jobs at risk in Northern Ireland, a senior British minister said on Sunday.

James Brokenshire, Britain’s minister for Northern Ireland, told his Conservative Party’s annual conference that Boeing’s role in getting the U.S. government to slap a 220 percent tariff on Bombardier’s CSeries jets, whose wings are made at a plant in Belfast, was unjust.

The U.S. planemaker accuses Canada and Britain of unfairly subsidizing Bombardier, a charge that Bombardier denies.

“The support that the UK provided to the Bombardier operation in Belfast was and remains compliant with international requirements,” Brokenshire said.

“I say to Boeing this case is unjustified and unwarranted. This action is not what is expected of a long-term partner to the UK. They need to get round the table and secure a negotiated outcome to this dispute quickly.”