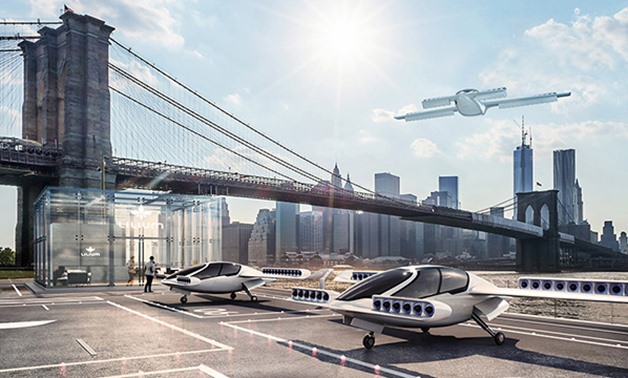 Flying taxi made by Lillium- Photo courtesy of company website

FRANKFURT - 5 September 2017: Lillium, a German start-up with Silicon Valley-scale ambitions to develop a 5-passenger “flying taxi”, has raised a second, $90 million (69.6 million pounds) round of financing from top tech investors, making it one of the best-funded electric aircraft projects to date.

The company, which took in $11.4 million only last year, has emerged as one of Europe’s hottest start-ups for attempting to solve hard physics problems for a new category of aircraft capable of vertical take-off and electric powered jet flight.

Lillium said on Tuesday the new funding round, led by Chinese internet giant Tencent, is joined by LGT, the largest family-owned investment firm in Europe, based in Liechtenstein; Atomico, a top European venture firm; and Obvious Ventures, whose co-founder, Evan Williams, is a co-founder of Twitter.

In April, Lillium said it was developing a five-seat “flying taxi” after mounting successful test flights of a two-seat jet capable of a mid-air transition from hover mode, like drones, to wing-borne flight, like conventional aircraft.

Wing-borne, electric-powered flight allows commuter aircraft to travel five or six times the distance of drones, a Lillium executive said. A 20-km (12-mile) trip from Manhattan to JFK Airport could take as little as five minutes, he estimated.

Its ambitions put it more in line with the likes of Tesla or Google than the e-commerce apps which currently dominate the start-up scene in Berlin or the self-financed engineering firms located across the country.

Lillium said it plans to use the fresh funding to dramatically expand hiring and carry it through the next development stages of its 5-seater electric jet, buying it time to meet stringent regulatory approvals.

The 70-employee company has roughly as many outstanding job postings as current staff, and plans to scale up hiring of aeronautical engineers, physicists, computer science and electric propulsion experts rapidly, Gerber said.

Lillium, which was founded in 2015 by four graduates from the Technical University of Munich, is shooting for a manned test flight of its five-seat aircraft around 2019, and to roll-out “flying taxi” commuter services, subject to regulatory approvals, some time in the next decade.

The jet will be a lightweight aircraft powered by 36 electric jet engines mounted to its wings via 12 moveable flaps. With a range of 300 km and cruising speed of 300 km per hour, Lillium is the only electric aircraft capable of both vertical take-off and jet-powered flight, the company said.

Combining these two features is what separates Lillium from rival start-ups working so-called flying cars or taxis that rely on drone or helicopter-like technologies, such as German rival Volocopter or European aerospace giant Airbus.