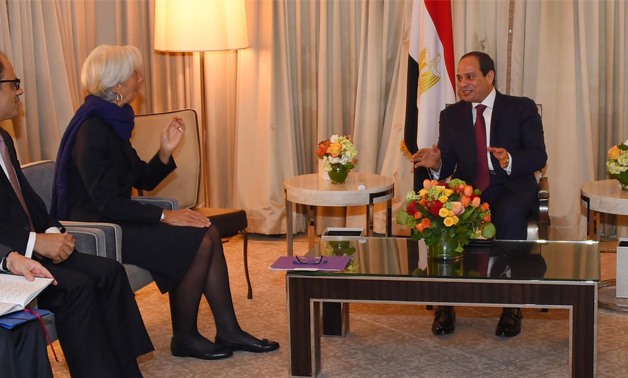 By: Egypt Today staff
CAIRO – 14 July 2017: The Managing Director of the International Monetary Fund (IMF), Christine Lagarde, on Thursday congratulated Egypt for the success achieved in the economic reform program that led to the second tranche approval.

IMF approved on the disbursement of the second tranche worth $1.25 billion of Egypt's $12 billion loan, following the completion of its Executive Board for the first review of Egypt’s economic reform program supported by an arrangement under the Extended Fund Facility (EFF).

Lagarde expressed the IMF's strong support for Egypt in economic reforms' efforts and added that the organization believes that these efforts will yield results.
"The government and the central bank have taken the right measures to rein in inflation, reduce the budget deficit and set the Egyptian economy on a path to stability and growth," Lagarde said.

The IMF managing director expressed the organization's readability to help Egypt to help unleash its economic potential and achieve higher and more inclusive growth that benefits all the Egyptians.

Egypt's Finance Minister Amr El Garhy told Egypt Today that Egypt will be expecting the second tranche within days to be added to the reserve accounts of the Central Bank of Egypt (CBE) in foreign currency and the equivalent will be transferred to the finance ministry's accounts.