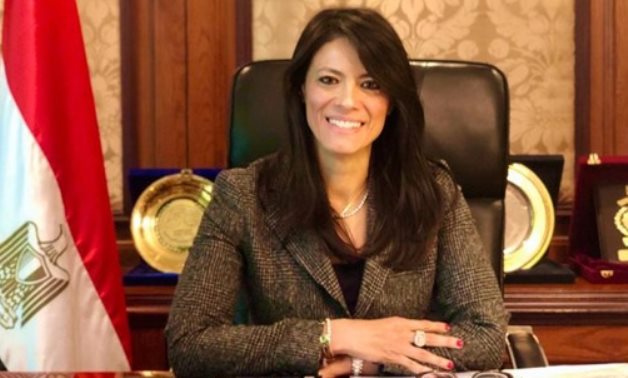 CAIRO - 24 November 2021: The Minister of International Cooperation Rania A. Al-Mashat met with a delegation of 16 CEOs and entrepreneurs from the Swiss Economic Forum Powerprener (SEF) within the framework of a series of meetings with company leaders and investors, to discuss strengthening joint relations, and to detail the Government of Egypt’s economic reforms and cooperation opportunities. This comes days after the launch of the economic cooperation program between Egypt and Switzerland.

Al-Mashat welcomed the delegation of businessmen and investors, stressing the close bilateral relations between the two countries, and the numerous potential cooperation opportunities. As Egypt aims to achieve comprehensive and sustainable development across fields, the Minister explained the economic developments in Egypt, and that the country plans to continue investing in its infrastructure, and in embracing the green transformation in preparations to host the United Nations Climate Change conference (COP 27).

Al-Mashat also reviewed the Ministry’s role in developing and strengthening economic cooperation relations between Egypt and its multilateral and bilateral development partners, international institutions, and the United Nations and its affiliated agencies, alongside managing the country’s development cooperation portfolio which exceeds $25 billion; explaining that the Ministry is also responsible for providing development financing to support the government’s plans in expanding its projects in transportation, education, and social protection, among other things.

The Minister also shared Egypt’s experience in mapping development financing to the Sustainable Development Goals (SDGs); an exercise that spotlights the principles of transparency and governance in managing the development cooperation portfolio, showing impact in projects, and allowing for data-driven decision making.

Al-Mashat explained that the economic and structural reform program that Egypt began in 2016, and the development efforts made in the last 7 years, enabled the country to achieve progress on various levels, coupled with mega infrastructure projects that were applauded by many International Financial Institutions (IFIs), despite the challenges posed by the COVID-19 pandemic.

The aforementioned reforms enabled Egypt to move from having an energy deficit to exporting energy to neighboring countries, and to implementing electrical interconnection with Iraq, Libya, Sudan, Saudi Arabia, Cyprus and Greece. Moreover, the country’s Integrated Sustainable Energy Strategy 2035 aims to increase the renewable energy mix to 42% by 2035. Within this framework, many projects were supported by development partners, and established through public-private cooperation, such as the Benban Solar Project, the largest solar energy plant in the region, and one of the largest in the world.

Al-Mashat also shed light on the major transportation projects being implemented to connect Greater Cairo with new cities, such as the New Administrative Capital and industrial zones; infrastructure projects bettering the livelihoods of citizens in terms of mobility; and industrial localization. This comes alongside several other national developments, such as those in the Information and Communications Technology (ICT) sector, and the empowerment of women through the launch of the “Closing the Gender Gap Accelerator” with the World Economic Forum (WEF), National Council for Women (NCW), and the private sector; the first accelerator bridging the gender gap in the Middle East and Africa.

The Minister expressed that as Egypt will be hosting COP 27 next year on behalf of the African continent, this is an opportune time to establish international partnerships, pushing the country’s efforts towards a green transformation, and also presenting what has been achieved so far in renewable energy, water, small and medium enterprises (SMEs), and digitalization.

During the meeting, Al-Mashat reviewed the country’s efforts in transforming into a regional energy center and inaugurating the East Mediterranean Gas Forum (EMGF), alongside efforts in developing the digitalization of education, as well as plans to expand social protection programs, and water and sanitation projects to preserve Egypt’s water resources.  The Minister also referred to the country’s efforts to increase tourism revenues as a vital sector of the country’s foreign currency.

The Swiss delegation thanked the Minister for the meeting, noting that the visit comes within the framework of strengthening ties between Egypt and Switzerland, and to learn of the country’s economic development and achieved reforms. The Swiss Economic Forum Powerprener was established by the Swiss Economic Forum, and among its activities are two business trips annually around the world to explore opportunities for cooperation and partnerships with other countries.

It is worth noting that Al-Mashat launched a cooperation programme between Egypt and Switzerland for 2021-2024, with the participation of a Swiss high-level delegation headed by the  Director General of the Swiss Agency for Development and Cooperation (SDC), Ambassador Patricia Danzi; Head of the State Secretariat for Economic Affair’s Economic Cooperation and Development Division, Ambassador Dominique Paravicini; the new Ambassador of Switzerland to Egypt, Ms. Yvonne Baumann; and a number of officials. This came in light of the Ministry of International Cooperation’s endeavors to consolidate economic relations with bilateral and multilateral development partners, and to set future cooperation plans to push forward Egypt’s Vision 2030, that also aligns with the SDGs.

Over the next 4 years, the new bilateral cooperation program aims to support the government and private sector’s development priorities in a number of sectors including gender equality, green growth, comprehensive and sustainable urban development, empowering youth to develop their skills, decent work, and an improved business environment.