By: Egypt Today staff
CAIRO - 15 October 2019: Foreign Minister Sameh Shoukry affirmed Tuesday Egypt's rejection of the Turkish aggression against Syria and its negative effects on the political efforts to settle the Syrian crisis, stressing the right of Syrians to defend themselves against this blatant aggression.

This came during Shoukry’s speech in a lecture at The Foreign Policy and United Nations Association of Austria, which he attended upon the invitation of Wolfgang Schuessel, former federal chancellor of Austria.

The lecture was also attended by senior Austrian officials,directors of international organizations in Vienna and a number of ambassadors accredited to Austria, according to Foreign Ministry spokesperson Ahmed Hafez.

During the lecture, Minister Shoukry reviewed Egypt's vision of the main challenges facing the Middle East.He also pointed out that not interfering in the affairs of other countries and working to extend cooperation with all partners in the world come among the main pillars of the Egyptian policy.

Moreover, the foreign minister addressed the issue of the Renaissance Dam and the latest developments of the tripartite negotiations that reached a dead end due to the Ethiopian position. In that regard, Shoukry stressed it is the international community's duty to ensure the success of the current negotiations to reach fair agreement on filling the dam's reservoir and its operating rules in accordance with the international law

The Foreign Policy and United Nations Association of Austriais a non-governmental organization established in 1945 and aims to raise awareness of Austrian public opinion on issues and challenges related to foreign policy and the United Nations. 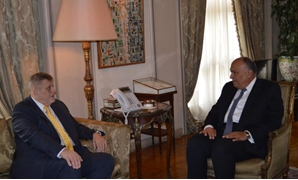