The man assumed to be Abu Bakr al-Baghdadi appears in a video released on April 29, 2019. AL FURQAN MEDIA NETWORK / REUTERS TV VIA REUTERS

By: Egypt Today staff
CAIRO – 2 May 2019: After five years since his first appearance with the emergence of the so-called Islamic State in Syria and Iraq (ISIS), Abu Bakr al-Baghdadi, leader of the terrorist organization, has appeared in a video footage, not-so-long after the self-declared caliphate was reported “fallen.”

Baghdadi was last seen in a viral video in 2014 giving a sermon in the Great Mosque of al-Nuri, in Mosul, Iraq. This came just a month after Mosul fell into the hands of ISIS.

Baghdadi sought to stress that the global community forged by ISIS continues, despite of defeat.

A recent report by The Atlantic said that for the world’s most wanted man, any link to the outside world is a vulnerability, a possible vector for intelligence agencies and militaries to find and eliminate him.

Breaking a half decade of silence carries the risk of death. Baghdadi, however, evidently concluded that being seen and heard from right now outweighed that risk. And that’s surely because ISIS faces dangers as an organization that are more significant than the ones Baghdadi does as an individual.

According to the report, what ISIS did that was new and different was declare a caliphate and actually establish one on real, physical territory. That was the heart of how Baghdadi distinguished ISIS from its predecessor organization, al-Qaeda; and that was the core of ISIS’s call to arms, which ultimately yielded thousands of foreign fighters and scores of deadly attacks worldwide.

ISIS also created something other terrorist groups had only dreamed of cultivating: a sense of virtual community to which those who otherwise felt adrift and detached from their real communities were drawn, the report added.

“That is part of why those who attacked their own communities in ISIS’s name shouldn’t be dubbed “lone wolves.” ISIS’s astonishing achievement was in making these vulnerable souls feel not alone, and instead like part of something bigger than themselves, no matter how far away.”

Now the territorial manifestation of ISIS’s self-declared caliphate—the animating force behind that entire global community—is gone, thanks to years of work by a wide-ranging coalition and incredible sacrifices by military, diplomatic, intelligence-community, law-enforcement, and other professionals from across that coalition.

Yet the global community ISIS forged is very much still in place. Indeed, ISIS has networks across the globe, and draws on those networks and the group’s prodigious output online to make a case to its followers that the fight is far from over—instead, it’s just entered a new phase.

That’s where Baghdadi’s reemergence fits in. The case for a post-caliphate ISIS is not an easy one for ISIS to make, given how heavily the group has emphasized its territorial control. So Baghdadi concluded that he’d surface and risk everything to present the argument himself. He eulogized those lost in the fight for Iraqi and Syrian territory. Then he pivoted to exulting in recent ISIS-linked attacks elsewhere, such as in Sri Lanka. Through it all, his message was: We’re still here, and we’re still fighting—and killing.

The last time we saw Baghdadi on video, he was essentially celebrating ISIS’s birth. This week, he was touting its rebirth, or at least trying to sell it.

What does the video mean for counterterrorism policy? First, it’s a reminder that the eradication of territorial control in Iraq and Syria doesn’t amount to the defeat of ISIS. Degrading the group’s networks globally will require a continued careful calibration of direct military force, intelligence sharing, arrests and prosecutions, training and equipping of partners, and other counterterrorism tools such as efforts to thwart the radicalization process.

Second, Baghdadi’s reaffirmation of ISIS as a global community means that the internet will remain a central battle space for the group. This fact requires, in turn, continued and indeed accelerated efforts by tech companies to remove and—better still—prevent terrorist content from being uploaded and shared. Governments should also do more to share with those companies what they know about the latest terrorist online tactics, trends, and trajectories, so as to empower the companies to police their own platforms more aggressively and more effectively.

Third, Baghdadi’s reemergence means that Americans and others must understand what is ahead in ISIS’s evolution. Trump’s premature declaration of ISIS’s defeat invites precisely the wrong expectations—that there will be no more ISIS-linked attacks—and, in turn, precisely the wrong reactions to those attacks when they do occur: not reactions but overreactions, untethered to the actual needs of figuring out what went wrong and how to prevent more bloodshed. In the face of terrorism—whether jihadist, white supremacist, or some other brand—what’s needed from the public is resilience, and what’s needed from government leaders is reassurance.

Baghdadi’s video was meant to sustain the sense that there’s still something for ISIS’s global community to belong to. It should also serve as an unintended reminder that there’s a far stronger global community that has, for years, rejected ISIS’s toxic call to violence and collaborated to address the threat posed by the group. 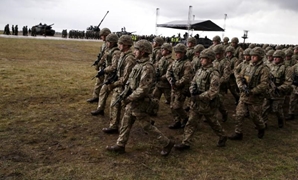