By: Mirit Agaiby
CAIRO – 25 May 2018: Minister of Social Solidarity Ghada Wali received on Friday a delegation from the World Bank, headed by Nahla Zaytoun, head of the social Services Protection office in Cairo. The group included international experts in the fields of aid programs, social participation, cases of disabilities, and information management.

The minister along with the World Bank delegation reviewed and discussed what has been accomplished so far from the monetary aid program, “Takaful w Karama” since its inception in March 2015, especially after expanding to the entire republic and having it cover more than 2.6 million families, with over 10 members each. The program comes within the social protection policies implemented by the government to limit poverty.

“We have raised a lot of praise from the World Bank group for what we have achieved with Takaful and Karam, especially in enabling the organization to extract medical reports of nationals to prove cases of disabilities. The World Bank also praised the complaints that the ministry took into consideration and improved in 27 governorates and 310 social departments to better respond to citizens’ needs in better time frames. The World Bank also recommended further expanding the program and its base of beneficiaries in the upcoming three years,” Wali stated.

Wali strongly emphasized the importance of shifting gradually from protecting to economically enabling through creating income opportunities especially for the youth segment of the population, women and other members of families who are able to work. She noted that the delegation’s most important goal of the visit was reviewing the results of a study that looked into the effects of the program throughout the past three years. The study, which was conducted by the International Food Policy Research Institute, showed that living conditions improved noticeably for the families benefiting from the Karama and Takaful program.

The minister pointed out that the total expenditure spent during May alone for families depending on the program amounted to 1.111 bullion, and the program’s dependents have reached almost 2 million families for May alone, increasing over 300,000 families. In total, Takaful and Karama program provides for 2,250,247 families.

Zaytoun, the delegation’s head, stated that in comparsion to other countries’ similar programs that the World Bank supports in implementation, Egypt is booming in terms of the speed with which the program was implemented and has come to cover all governorates, reaching 5,630 villages. The quality with which the program implements its activities is improving annually, she added.

President Abdel Fatah al-Sisi said on April 29 that he was “delighted” with the implementation of a comprehensive social protection system that covers the poor and the needy.

During a ceremony to celebrate Labor Day, Sisi said that over the last four years the government has been implementing the Takaful and Karama programs, which benefit millions of families and help them live a “decent” life.

Takaful and Karama are cash transfer programs that are part of a social protection net implemented by the government to protect the poor from the negative effects of Egypt’s reform program.

Both programs where hailed by economists as they diverge from conventional pension schemes, aim to deliver subsidies to those who need them most and limit waste and corruption in social spending.

On the occasion of releasing its staff report for the 2017 Article IV Consultation and the second review for Egypt’s economic reform program, the International Monetary Fund (IMF) published an article on Egypt under the title “Egypt: Time to Entrench Growth and Make It More Inclusive” in January, highlighting the impact of the bold reforms on the economy and listing the required measures to promote sustainable economic growth further.

The article’s text is included below.

Egypt’s economy is recovering, supported by prudent macroeconomic policies and initial bold reforms aimed at addressing the major challenges that have confronted the economy in recent years. The task now is to deepen reforms to raise economic growth further, make it last, and spread its benefits to Egypt’s rapidly growing population and its youth and women, as the IMF says in its latest economic health check.

After more than a year since the launch of the economic reform program, GDP growth is strengthening and inflation is declining. The government trimmed the budget deficit, tourism revenues and remittances are increasing, and the country’s foreign exchange reserves have been rebuilt. The floating of the pound and the initial steps to improve the business climate have helped boost growth.

“This macroeconomic turnaround at home and the supportive global economic environment provide a unique opportunity to carry the reform momentum into areas that have historically been hard to tackle. Deep and lasting structural reforms are needed to create jobs as speedily as needed for Egypt’s growing population,” said Subir Lall, head of the IMF team for Egypt.

Below are the IMF’s key recommendations:

Egypt must entrench the stability attained thus far. This entails preserving the flexibility of the exchange rate and further reducing inflation. The government should also continue to lower the budget deficit to contain public debt. For this purpose, the IMF suggests:

- Collecting more revenue to pay for much-needed social services and to invest in education, health, and infrastructure: Reducing tax exemptions, making the tax system more progressive (richer people pay progressively more in taxes), and making tax administration more efficient will facilitate this process. Revenue could grow by 4 percent of GDP in the medium term as a result, analysis suggests.

- Eliminating most fuel subsidies, which benefit mainly the rich, and allowing fuel prices to change in line with costs: This would protect the budget from movements in global oil prices and the exchange rate and safeguard priority spending on social programs and necessary infrastructure. Helping low-income families.

Although economic stabilization is critical, Egypt also needs to protect its lower-income families. This requires continuously improving the efficiency of social assistance by reducing price subsidies and expanding better-targeted cash transfer programs such as Takaful and Karama to free up resources for those who need them most while avoiding the buildup of unsustainable public debt.

Egypt’s growing population needs about 700,000 new jobs every year, which is possible only if the private sector becomes the main engine of growth. For that to happen, the state—which has a prominent role in the Egyptian economy—needs to step back from certain sectors and make room for the private sector to invest and grow.

To this end, priorities include ensuring fair competition for private companies in the markets for their inputs and products, improving the governance and transparency of state-owned enterprises, reducing the perception of corruption, improving access to financing and land, and integrating more women and youth into the labor market.

Egypt launched a reform program when its economy faced rising imbalances that led to weakening growth, high public debt, a widening current account deficit, and declining official reserves. To support the homegrown reforms, in November 2016 the government initiated an IMF-supported arrangement to restore the stability of the country’s finances and promote growth and employment, while shielding lower-income households from the adverse effects 3 of the changes. On December 20, 2017, the IMF Executive Board approved the third installment of the three-year, $12 billion Extended Fund Facility. 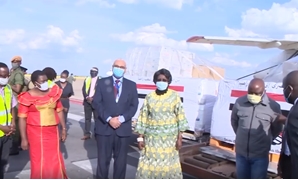 Over LE 20B in subsidy for Takaful and Karama program: Minister