By: Lolwa Reda
CAIRO – 3 December 2017: Under the leadership of President Abdel Fatah al-Sisi, the National Council for Women (NCW), in cooperation with several governmental and non-governmental agencies, established the 2015-2020 National Strategy for Combating Violence Against Women (NSVAW) in June 2015.

The women empowering strategy aims to safeguard the dignity of women and protect them from acts of violence, as well as placing them on an equal footing to men in the domestic and public spheres, allowing women to thrive in their lives.

Dubbed the “Year of Egyptian Women,” 2017 has witnessed the implementation of some policies stated in the NSVAW, especially those focused on raising public awareness regarding domestic abuse and the way that girls and women should be treated. The 2015-2020 strategy aims to confront all forms of negative discrimination against women by ensuring social justice, equal opportunity, and gender equality between men and women.

The National Strategy, which aligns with Egypt’s 2030 Vision and the United Nations 2030 Agenda for Sustainable Development, takes into account the cultural background, specific needs of the Egyptian society, and the human and financial resources available; thereby, ensuring the strategy's suitability. A monitoring and evaluation mechanism was also developed as part of the strategy to measure its progress and success.

The women empowerment strategy focuses on four main pillars: prevention, protection, intervention, and legal procedures. By analysing the social, economic, and developmental aspects that have led to the phenomenon of violence against girls and women, the first pillar aims to uncover the roots of the issue. The first pillar also aims to raise public awareness, rectify religious discourse and overturn misperceived beliefs through information technologies and media outlets. Under prevention, a systematic review and revision of existing laws and policies is expected.

The second pillar – protection – builds on pillar one's systemic review of existing laws by developing legislation that combats violence against girls and women. It also establishes a coordination and referral system to ensure the rigid enforcement of laws, reducing the likelihood of the guilty being acquitted. Like prevention, protection also aims to raise awareness, however, unlike the former, the latter aims to educate people on relevant laws and legislation that offer them protection through simplifying legal procedures, increasing accessibility to legal services, and decreasing the time of enforcement. Psychological support and physical security services are developed under this pillar to ensure that women are given suitable conditions to report their assailant.


The third pillar – intervention – includes establishing hotlines to provide lifesaving help and support to empower survivors to find safety and lead an abuse-free life. To create a more accessible system, this pillar also provides shelters and safe-houses for women survivors who report crimes committed against them. This pillar also aims to provide counselling and psychological help for women victims, as well as rehabilitation programs for perpetrators.

The fourth pillar – legal procedures – focuses on reaching the international standards for the protection of women, and reducing the cases of violence against women, relative to other countries. Under this pillar, the government will exchange information with other countries, pooling together their expertise, and benefitting from their wide strides in the field of women empowerment. This phase will also see the establishment of Specialist Court Chambers to reduce the time of legal proceedings, reducing the burden of going to court on women and increasing women's likelihood of reporting attacks on them.

The ministries of endowment, education, higher education, social solidarity, culture, interior, tourism, youth and sports, health and population, justice, manpower, all have vital parts to play in the 2015-2020 National Strategy for Combating Violence Against Women. All mentioned ministries plan on rolling out changes to combat violence against girls and women, which is expected to improve girls and women’s living standards, in their respective departments and sectors.

In accordance with the National Strategy, during the “Year of Egyptian Women” multiple significant policies were implemented to better Egyptian women’s standards of living and protect them. In June 2017, the Women’s Complaint Office, originally established in 2000, formed Protection Units to secure and protect women during Eid, which is known to be a time when sexual harassment on the streets increase. The Unit’s purpose is to parole the streets, deter possible perpetrators, and receive help calls. The Unit deals with girls and women above the age of 18; cases under 18 fall under the responsibility of the National Council for Childhood and Motherhood. Cases that require security protection are referred to one of the eight women’s shelters, and those who require psychological help are scheduled in for sessions and meetings; both of which occur after security screening.

In similar vein, 2016 saw several Egyptian Universities, including Ain Shams University and Assiut University, establish a “Unit for Combating Sexual Harassment,” the aim of which is to ensure that girls and women feel protected and to hold attackers accountable. The Units walk through campus, stop promiscuous acts in their tracks, and organize events to raise the students’ awareness of the issue of Violence Against Women (VAW).

The National Strategy also led to the development of a proper medical protocol and guide for dealing with violence survivors. The guide, developed by the Ministry of Health in collaboration with the United Nations Population Fund (UNFPA), is currently being implemented. So far, fewer than 200 male and female doctors have been trained in public hospital, with the goal of training 200 more and then turning to educational and private hospitals.

Monitoring and evaluating the NSVAW at this stage may be too early, especially considering that most of its goals are long-term, meaning that they are expected to take a few years to precipitate. However, the preliminary policies that rolled-out have been promising, suggesting that we will soon see a further decline in the number of cases of violence against women. We can expect to see a lot more policies being implemented throughout the next few years, as well as a gradual change in the Egyptian society towards a more equal and fair one.

Through the complete implementation of the four pillars, the National Strategy is expected to increase public awareness of governmental and legal institutions to better address violence against women, increase the number of women who come forward to report abuse, decrease the number of women who face abusive situations, and strengthen national mechanisms for combating violence against women. 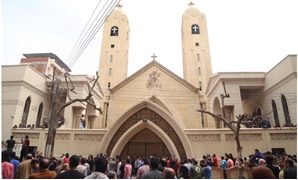 In pics: Female passengers at Cairo airport welcomed with flowers