Furthermore, in her capacity as the chairperson of the Executive Office of the Council of Arab Social Affairs, Wali will deliver a speech on coordination among Arab countries and UN member states to counter terrorism and extremism challenging sustainable development in the region. Wali’s speech will take place during a three-day ministerial Segment that launches on July 17, attended by the UN Secretary-General deputy, representatives of regional and international organizations, and 70 ministers from the UN member states.

During the Arab League summit in Amman, Jordan March 2017, Minister Ghada Wali was assigned to chair the Arab League committee for the implementation of the Arab Declaration on “Arab Action to Counter Terrorism”. In addition, Egypt’s participation in this High-Level Forum comes within the framework of the country’s commitment to achieve and advance sustainable development represented by Egypt’s Sustainable Development Strategy 2030.

Ahead of the High-Level Forum event and in cooperation with the Arab League, the social solidarity minister organized a meeting with Arab states ambassadors in New York aiming at coordinated efforts towards implementing the Arab League decree (699) on Terrorism and Social Development.

The High-Level Political Forum aims to track progress on

two years after they were adopted by 193 countries. The forum is organized on July 10-19 and includes various events to discuss successful approaches to eliminate poverty and hunger, ensuring healthy lives and access to quality health services, achieving gender equality, building resilient infrastructure, implementing partnerships, and conserving and sustaining global resources.

With #HLPF2017 underway, here's a reminder of what we're looking to achieve by 2030. #GlobalGoals #2030Agenda @GlobalGoalsUN pic.twitter.com/d38FYc6VQa


President of the Economic and Social Council (ECOSOC) said in his opening remark: “a successful session would send a strong message of our collective commitment to leave no one behind as we pursue the timely implementation of the 2030 Agenda.” According to the ECOSOC official website.

Poverty remains one of the greatest challenges of our time - @UNECOSOC at #HLPF2017 pic.twitter.com/jrl27lJ0BZ


The ECOSOC forum is held annually to represent the culmination of ECOSOC's annual cycle of work and convenes a diverse group of high-level representatives from Government, the private sector, civil society and academia for policy dialogue, review and recommendations on the 2030 Agenda for Sustainable Development and other internationally agreed development goals.

Brush up on the 17 #GlobalGoals for a healthy & peaceful world ahead of next week's #HLPF2017! https://t.co/J91ghT6IYY #SDGs pic.twitter.com/iJ5z6vqYl2


In 2017 Forum, the set of goals to be reviewed in depth will be the following, including Goal 17. Strengthen the means of implementation and revitalize the Global Partnership for Sustainable Development that will be considered each year: Goal 1. End poverty in all its forms everywhere, Goal 2. End hunger, achieve food security and improved nutrition and promote sustainable agriculture, Goal 3. Ensure healthy lives and promote well-being for all at all ages, Goal 5. Achieve gender equality and empower all women and girls, Goal 9. Build resilient infrastructure, promote inclusive and sustainable industrialization and foster innovation, and Goal 14. Conserve and sustainably use the oceans, seas and marine resources for sustainable development.

Furthermore, the Forum side-events included an event for youth delegations to present their vision on Sustainable Development and ways to overcome challenges to achieve the 2030 goals.

For the next 10 days we're at @UN #HLPF2017 checking global progress towards #SDGs & holding European govs to account on #2030Agenda. pic.twitter.com/koE8pmyN3P

Thanks for an inspiring side-event to #HLPF2017 youth delegates! #HLPF2030 #agenda2030 pic.twitter.com/pGqj0ZstPF

, was developed to follow up on the forum and to send messages to the stakeholders attending the forum and discussing the Sustainable Development Agenda. 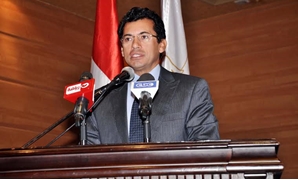