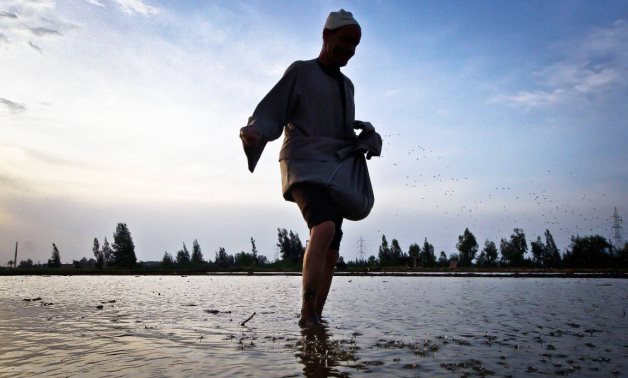 The tripartite negotiations between Egypt, Sudan and Ethiopia concerning the controversial Grand Ethiopia Renaissance Dam on the Blue Nile river are still shrouded in uncertainty, instilling fear of drought into about 50 percent of the population, and thousands of Egyptian farmers whose livelihoods rely on cultivating only 3 percent of Egypt’s territories.

As the Nile River supplies about 93 percent of Egypt’s annual renewable water resources, the construction of the dam imposes great threats to the nation, if a sustainable agreement on its operational rules and the process of filling its reservoir is not reached. Speaking to Business Today Egypt, Head of Farmers’ Syndicate Hussein Abdel-Rahman Abu Saddam explains that if the agriculture sector loses 20 billion cubic meters of water, about 2 million feddans will turn into non-arable land, thereby negatively affecting about 10 million people. “By association, many supplementary industries will be affected such as agro-industrial factors and rice mills. In addition, part of the agriculture infrastructure could be lost after we had already dug new irrigation canals and reclaimed other pieces of lands,” he adds.

“Egypt’s renewable water resources provide approximately 65 billion cubic meters of water annually, including 55.5 billion cubic meters from the Nile River, representing about 90 percent... With the increase in the population and the constant agricultural expansion, Egypt suffers from a severe shortage of water,” Abu Saddam says. “The agricultural sector is highly vulnerable to the repercussions of water scarcity, as it consumes about 80 percent of the Egyptian water resources.”

Salama Ahmed, a farmer in al-Mahallah al-Kobra city of Al-Gharbiya governorate, also expresses his fear of the situation, and how he is dealing with it. “Certainly, the agriculture [sector] would be affected and many farmers fear this matter,” he says. “However, as we are living in Gharbia governorate (Egypt’s Delta), our crops will not be severely affected, except for rice because it consumes a large amount of water. Other lands far away from the Delta could be affected. If drought occurred due to the dam construction, the Delta would largely be unaffected, unlike other arable lands in upper Egypt and Fayoum, which have reddish soil.”

“If water levels declined, we would resort to digging wells as underground water is located 2 meters beneath the ground,” says Ahmed, who is a father of three children and recently began using a drop irrigation system to save water amid the current water press. “Drop irrigation saves one-third of the water that is consumed by surface irrigation and saves half of the amount of the fertilizer,” he explains.

Ahmed could be lucky because he lives in Egypt’s Delta, but arable lands in other parts nationwide already suffer from drought. “There are pieces of land already suffering from droughts in Minya’s Al Edwah on the west bank of the Nile,” says Abu Saddam, attributing the reason to the lack of water distribution to some areas due to the expansions of new agricultural lands.

Egypt’s agricultural lands covered 10 million feddans in 2015, compared to 9.6 million feddans in 2010, the Central Agency for Public Mobilization and Statistics (CAPMAS) noted in a report issued on September 19, 2016. Additionally, according to World Bank data, Egypt’s agricultural areas increased to 3.6 percent in 2015, compared to 2.6 percent in 1961. The story of the dam

Ethiopia started building its mega-dam on the Blue Nile river in May 2011 without going back to the downstream countries Egypt and Sudan. Since then, Cairo has voiced its concern over how the dam can reduce the country’s annual shares. Since 2014, the three countries have started tripartite negotiations to reach an agreement concerning the dam.

In 2015, they signed the Declaration of Principles, under which the downstream countries should not be negatively affected by the construction of the dam. Negotiations have continued in the hopes of finding a settlement. However, the talks reached several stalemates throughout 2019 and until today, primarily regarding the operation of the dam and the reservoir’s filling timeline.

In mid-July 2020, Ethiopian authorities unilaterally carried out the first phase of the filling process with 4.9 billion cubic meters; and it is expected – as reported by the BBC- that the second phase of the filling would reach 13 billion cubic meters. Ethiopia seeks to fill the reservoir in between five to seven years. Egypt’s average water per-capita is expected to drop to 582 cubic meters by 2025, from 663 cubic meters per year in 2014, according to CAPMAS. Additionally, Egypt’s population is likely to reach 115.3 million people by 2027 in accordance with Population Pyramid, to consequently form more burden on Egypt’s water resources.

In his speech at the opening session of the regional workshop organized by FAO in September 2019, regarding the climate change impacts on agriculture and water, Egyptian Minister of Water Resources and Irrigation Mohamed Abdel-Atti said a 2 percent decline of Egypt’s Nile water share would turn 200,000 feddans into non-arable lands. It is all about reaching an agreement

“If the three countries failed to reach a binding agreement, and if Ethiopia took a unilateral act, it would have its negative effects. So, starting the negotiations in 2014 was essential,” Dr. Houssam El Moughazi, former Minister of Water Resources and Irrigation tells Business Today Egypt.

If a final agreement is reached, the negative consequences could be overcome during the years of filling process, Moughazi adds, explaining, “Sure, water losses, evaporation, and leakage of water inside earth could affect and cause decline. However, the Renaissance dam is an annual dam and the inflow of water to it should be released over the 12 months in order to receive the amount of rainwater in the following water year, which starts in June until August.” The former minister argues that the three countries critically have to reach a final agreement regarding operating the dam.

In response to a question on whether the second phase of filling the dam reservoir would cause a large impact on the downstream countries, Moughazi said, “It is hopeful that the three countries reach a final agreement during this time before the second phase.” In case severe water shortage is recorded and Ethiopia controls the amount of water that flows to Egypt, it would definitely affect the agriculture sector, which represents 12 percent of Egypt’s GDP. This would affect the production of all basic crops like sugar cane, rice, maize and wheat, Dr. Mohamed Meshaal, head of the Scientific Committee for the Agriculture Economy and Advisor to the Minister of Agriculture, tells Business Today Egypt.

“Currently, there is no shortage in water coming to Egypt and water levels this year increased [to a level] we did not expect. I rule out that it [drought] could happen, thanks to the current leadership. The Egyptian government is exerting termendous efforts to curb the problems of lacking irrigation water. The scarcity of water leads to an increase in salts in low-lying lands and leads to wasting and death of lands, which may negatively affect the agricultural sector in general, disrupt the desired agricultural development and increase the unemployment rate with a massive damage to the Egyptian economy,” Meshaal says. “The government is working on using modern irrigation technology systems in order to consume less water,” he adds.In April 2020, the Ministry of Water Resources and Irrigation announced a number of development projects in irrigation systems, aiming at changing the surface irrigation systems into the drip irrigation system, using solar energy to rationalize water consumption.

Abu Saddam also notes that farmers are re-using 20 billion cubic meters of agriculture water waste of some crops like rice in irrigating other crops.

“The Nile water issue is a matter of life or death for Egyptians,” President Abdel Fattah El Sisi said repeatedly during his speech at the United Nations General Assembly and in other speeches to Egyptians, always trying to assure anxious citizens who are worried about their fate. Nevertheless, for the time being, the lifeline of the Egyptian nation is still threatened, leaving millions in fear as the negotiations run on.