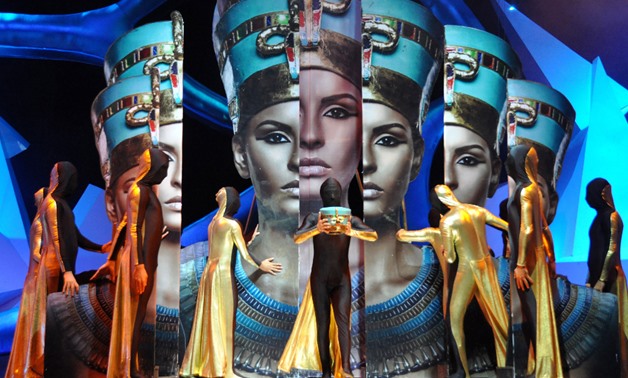 From the most recent events and taking you back to the beginning of the year, we look back at the highlights of Egypt’s culture scene in 2018.

Last month brought to a close a successful year of culture for Egypt, culminating in the third Global Migration Film Festival (GMFF) which featured films and documentaries from around the world, capturing the promises and challenges of migration. It was a year of festivals, comebacks and breakthrough, award-winning movies. Starting from year end and going back to the beginning of 2018 we look back at the highlights of Egypt’s cultural scene.

In December the Faculty of Fine Arts in Zamalek celebrated the 110th anniversary of its establishment with an art exhibition organized by the faculty. Artists, professors of fine arts and students attended the show which included the artistic works of a group of faculty professors in various fields plus a music and drama program.

My Name Is Nour, an Egyptian documentary addressing Down Syndrome, was chosen to participate in the ninth edition of the Meknes International Youth Film Festival set to take place in February 2019. Meanwhile, Egyptian director Marwan Hamed won the Best Director Award on his movie Turab El-Mass’ (Diamond Dust) at the first edition of Casablanca Arab Film Festival. Based on the novel of the same name by Ahmed Mourad, the movie stars Asser Yassin, Menna Shalaby, Maged el-Kidwany, Ezzat al-Alayly, Mohamed Mamdouh, Khaled al-Sawy and Sawsan Badr.

The National Cinema Festival was also held in November where Amr Saad won the Best Actor award for his role in Mawlana (The Preacher), Egyptian actress Heba Ali took home the Best Actress award for her role in the move AkhdarYabes (Withered Green). Meanwhile, the Best Director award went to acclaimed Egyptian director Marwan Hamed for his film Al -Aslyeen (The Originals).

Fall saw the makers of Egyptian horror movie 122 announce they are done with the film, the first of its kind in Egypt to use 4DX technology, which allows the observer to literally “live” the film while watching it combine many sensory factors. The movie is directed by Iraqi Yasser el-Yassery and stars Amina Khalil, Tarek Lotfy, Ahmed el-Fishawy, Mamdouh Mohammed, Gihan Khalil, and Mohammed Dawood.

The Bibliotheca Alexandrina will issue its first Italian publication in 2019, and the first knowledge embassy of the bibliotheca will inaugurate in Europe in cooperation with the Catholic University in Milan, Italy.

Minister of Culture Ines Abdel Dayem decided to revive the Cairo International Fine Art Biennale after a 10-year hiatus, and its new edition “Toward the East” is slated to launch in April 2019.

The 34th edition of Alexandria International Film Festival for Mediterranean Countries (AIFF) awarded veteran actress Nadia Lotfy the shield as Bride of the Mediterranean for playing a great role in enriching Arab cinema.

Lebanese singer Elissa expressed her happiness for being chosen as ambassador of the breast cancer awareness campaign. Elissa revealed her struggle with the disease in her latest clip Ela Kol Ely Beyheboony (To All Those Who Love Me).

Egypt hosted the 21st edition of the Arab Culture Ministries Conference on October 14 and 15.Minister of Culture Inas Abdel Dayem and Minister of Communication and Information Technology Amr Talaat discussed new methods to create a digital cultural platform. The two ministers aim to cooperatively document all the Ministry of Culture’s activities through audios, visuals, prints, documents and blogs.


On September 2, Minister of Culture Ines Abdel Dayem officially appointed Dr. Ashraf Zaki as the new president of the Academy of Arts, the Cairo International Festival for Contemporary and Experimental Theatre kicked off on September 6 at the Higher Council for Culture, and famed Egyptian singer Tamer Hosny hit the one-billion views mark on all his songs on his YouTube channel.

Egyptian comedian Mohmed Sharaf passed away on Friday, July 28 at the age of 55 after a long struggle with heart disease.

The United Nations Population Fund (UNFPA) cooperated with Bibliotheca Alexandrina to launch the Music for Development project during the 16th International Summer Festival, hosted by the Bibliotheca.

Egyptian play “Mama” participated in the most prominent theatrical festival in the world, Festival d’Avignon in France. “Mama” is directed and written by founder of the Temple Independent Theatre Company Ahmed el-Attar.

The Egyptian Film Week held in Belgrade achieved booming success and witnessed the attendance of a large number of people. The film week was organised by the Egyptian Embassy in Belgrade, in cooperation with the Yugoslav Film Museum (Kinoteka) and the Arab Cultural Centre in Serbia.

Baalbeck International Festival, the oldest and most prominent cultural festival in the Middle East,ran from July 20 to August 18 and honoured legendary Egyptian singer Umm Kulthum in its opening ceremony.

Minister of Culture Ines Abdeldayem announced that the Egyptian Ministry of Culture decided to create the first documented archive of Egyptian cinema and heritage since 1896, naming it “Egyptian Cinematic.”

Graffiti artists drew famous icons of Egypt such as Mohamed Salah, Umm Kulthum, Naguib Mahfouz and many others on the walls of Downtown Cairo. Graffiti artist Ahmed Fathy, also known as El Na2ash, explained that they chose to fight radicalism and the status quo through art.

Elham Shahin was appointed honorary president of CAM Festival in Tunisia, which focuses on short films, documentaries and stories.

The Gold of the Pharaohs exhibition kicked off in Monaco, showcasing 149 ancient masterpieces from the Egyptian Museum. The huge, unique event was hosted by The Grimaldi Forum in Monaco, between July 7 and September 9, under the auspices of Prince Albert II and the Egyptian government.

The Arab Arts Focus (AAF) event crossed borders for the second time to participate in the Avignon Le OFF arts festival in France, which was heldJuly 6-24. The AAF program at the festival included five performances from four Arab countries, including Egypt, Palestine, Morocco, and Lebanon.

Egyptian musician Michael el-Masry passed away at the age of 85. Born in 1933 in Cairo, Masry was a violinist, composer and music producer. The musician created more than 100 soundtracks, songs, and operas, most notably the soundtracks of series like “Layali al-Helmiya” (Helmiya nights), “Meen mabiyhebish Fatima” (Who doesn’t love Fatima?), “Aelat al-Hag Metwali” (Metwali’s family).

The Egyptian National Theatre Festival honoured writer Mahmoud Diab in its 11th round.

The Serbian National Museum, the largest and oldest in the Balkans, convened a roundtable entitled “Ancient Egypt in Serbian Society” on July 12.
The first session of the Arab-Chinese literature forum kicked off on June 21 in Cairo.
Egyptian virtuoso musician Omar Khairat performed a dazzling concert at the Mariinsky Theatre in Saint Petersburg on Monday, June 18 on the sidelines of the FIFA World Cup.

Scott Adkins (Boyka) participated for the first time in Egyptian cinema in Harb Karmouz, starring Egyptian Amir Karara and directed by Peter Mimi.
The Arab Arts Focus (AAF) event participated in the Avignon Le OFF art festival, which was held from July 8 to 24.

An Egyptian exhibition, under the theme “Robabecciah: The informal city,” ran from May 26 to November 25 at the 16th edition of the 2018 Venice Architecture Biennale. Here in Cairo, the Arab Digital Expression Foundation (ADEF) was held on June 23 the Moqattam Arts and Technology Festival.

A Year of Firsts, Awards and Achievements

•Egyptian singer Sherine Abdel Wahab performed a ladies-only concert for the first time in Saudi Arabia at King Abdullah Sports City in Jeddah.
•Minister of Culture Ines Abdel-Dayem honoured veteran actor Ezzat El-Alaily during a ceremony held by the National Center for Theater.
•Palestinian-Jordanian writer Ibrahim Nasrallah won the 11th International Prize for Arabic Fiction on Tuesday for his novel “The Second War of the Dog”.
•In April Minister of Culture Ines Abdel Dayem received the German Jazz Music Award, which went to Egyptian-German ensemble Cairo Steps.
•Cairo’s Citadel hosted the third day of the International Festival for Drums and Traditional Arts.
•Egyptian series “Grand Hotel” became the first Arabic series to ever be featured on Netflix.
•The National Arab Music Ensemble of Cairo Opera House performed two concerts in Riyadh, Saudi Arabia on April 25 and 26.
•The second edition of Cairo Cinema Days Festival kicked off on April 23.
•The Arab League Secretary General Ahmed Abul-Gheit inaugurated a book fair at the library of the pan-Arab organization.
•Egypt’s Goethe Film Week was held April 12-19.
•Egyptian author Ahmad al-Qarmalawi was one of the winners of the 2017-2018 Zayed Book Award.
•The 14th edition of the Alexandria International Book Fair ran from March 31 until April 9, 2018
•The sixth Cairo Contemporary Music Days ran from April 14 to April 29, focusing on German contribution to contemporary music.
•The second Jazz Tales Music Festival ran from April 10 to April 14.
•A depiction of one of the most renowned pharaohs in history, Hatshepsut, was found by Egyptology lecturer Kenneth Griffin from Swansea University.
•The 7th edition of the Luxor African Film Festival was held March 16-22 under the auspices of President Sisi at the Temple of Deir al-Bahri.
•Sultan bin Muhammad Al-Qasimi, the sovereign ruler of the Emirate of Sharjah, honoured veteran Egyptian theatrical artist Mohamed Sobhy.
•President Abdel Fattah al-Sisi approved Luxor becoming the capital of arts and culture.