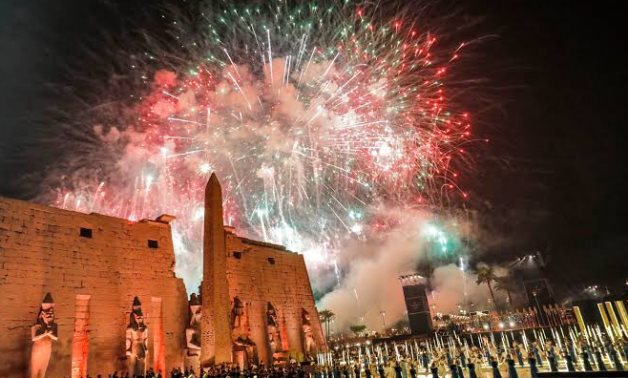 In a glittering ceremony in the City of Sun, Luxor, Egypt reopened the 3,000-year-old Al-Kebbash Road or Avenue of the Sphinxes. Lying between Karnak Temple and Luxor Temple, the 2,700-meter Pharaonic Road of Rams is an open-air museum that once witnessed major processions of ruling Pharaohs, and was a festive avenue for various holidays, including the renowned Opet Festival, the Ancient Egyptian festival celebrated in Thebes (Luxor) and the coronation feast of the king, especially during the New Kingdom of 1550 to 1069 BCE. Most of the original 1,057 statues lining Sphinxes Avenue have been recovered, thanks to years of excavations and restorations by the Egyptian government.

“Every place in Luxor carries a part of Egypt’s history. Nothing in the world matches the brilliance of the archaeological area that surrounds us,” Minister of Tourism and Antiquities Khaled Anany said in his welcome speech. “Today we celebrate Luxor in its new shape: for 70 years, Egyptian restorers have been working to renovate Al-Kebbash Road and I praise the work of Egyptian archeologists. Luxor deserves to be dubbed the largest open-air museum in the world,” he continued.

For El-Enany, there is still much more to come. “We managed to unveil Al-Kebbash Road, however, the archaeological work has not ended and will resume for many years to come. The event is not only about the Avenue of the Sphinxes: we are here to announce that we have finished the visual identity work and to promote Luxor tourism. Our strategic promotion highlights that Egypt is a vibrant modern country full of life, but is also proud of its historical civilization,” the minister noted.

All eyes were on Egypt for the historic event, attended by President Abdel Fattah El-Sisi, prominent statesmen and ambassadors of foreign countries to Egypt. Under the glittering stars the unveiling began with an reenactment of the Opet Festival which in Pharaonic times involved priests, civilians and noblemen making a processional walk from Luxor Temple to Karnak down the avenue during the second month of the Nile flooding season.

The United Philharmonic Orchestra with its 160 percussionists and conducted by Nader Abbassi ushered in a procession of performers carrying their tributes, among them the deity Amun Ra who was transported on the sacred boat to his harem for fertility.

Amid the breathtaking spectacle Shahd Ezz sang “The First Call” in the Ancient Egyptian language, the song’s lyrics taken from the hymns written on the walls of the temples celebrating the revered festival. She was followed by Haidy Moussa and Ezz el Ostoul singing the Hatshepsut Chant and the Amun-Ra Chant respectively, both of which were traditionally performed during the festival and likewise were inspired by hymns recovered from temple walls.

In an impressive display, laser beams lit up the skies of the West Bank and the Temple of Hatshepsut while floating golden boats, designed to symbolize the trinity of the sacred Paharaonic gods Amun, Mut and Khonsu, were drifted along the Nile.

“Every place in Luxor carries a part of Egypt’s history. Nothing in the world matches the brilliance of the archaeological area that surrounds us.”

“Today we celebrate Luxor in its new shape: for 70 years, Egyptian restorers have been working to renovate Al-Kebbash Road.”

“We are here to promote Luxor. Our strategic promotion highlights that Egypt is a vibrant, modern country full of life, but is also proud

of its historical civilization.”

“Under the glittering stars the unveiling began with an reenactment of the Opet Festival.”

“The show closed with a brilliant fireworks display across the Luxor sky, bringing

to an end the remarkable and historic ceremony.”

A documentary titled “Luxor . . . The Secret” was screened for world guests in Luxor and for those tuning in from all over the world. The documentary highlights the beauty of the City of the Sun, and how it has hosted various civilizations over history. “Luxor is like a small encyclopedia containing all ancient Egyptian history and secrets,” the documentary narrates.