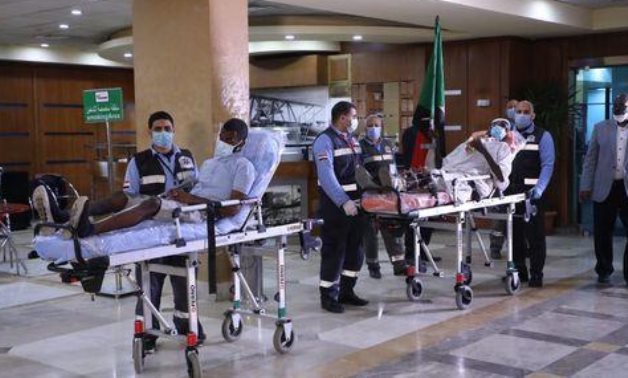 CAIRO – 11 March 2021: Cairo received on Thursday morning seven Sudanese people who were injured during the Sudanese Revolution 2018-2019 to help them complete their treatment in Egyptian hospitals.

Health Minister Hala Zayed said the ministry’s hospitals is set to receive a total of 33 injured Sudanese people in succession.

“This comes in implementation of the President Abdel-Fattah El-Sisi’s directives to provide all means of medical support to the Sudanese brothers,” a statement by the ministry said.

It added that this medical support comes “within the framework of the deep bilateral relations between Egypt and Sudan and the extension of joint cooperation bridges between the two sisterly countries.”

Top medical officials received the Sudanese citizens at the Cairo International Airport, according to the statement.

The injured cases were moved via seven ambulances to the Nasser Institute hospital in the capital.

Medical teams at the hospital examined the Sudanese citizens in preparation for conducting surgeries to them based on each one’s cases.

According to the statement, five other injured Sudanese people will arrive in Cairo within hours.

Since the incidents of the Sudanese revolution, Egypt has sent Sudan 98 tons of medical aid, the statement added.

This comes less than a week after Sisi made an official visit to Sudan, during which he met with Sudan’s Prime Minister Abdalla Hamdok; head of Sudan's Transitional Military Council Abdel Fattah Al-Burhan; and his deputy, Mohamed Hamdan Dagalo (Hemedti).