In pics - Se’da the Mechanic: My passion is to teach women how to fix cars, and men insist to ignore me 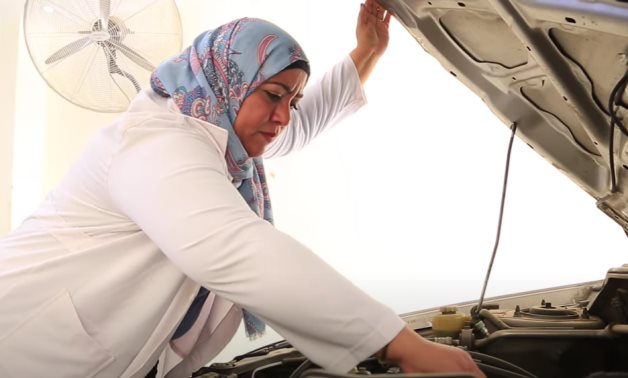 Se’da the mechanic: I teach women how to fix cars; men make fool of me - Screenshot of interview

CAIRO – 13 February 2021: As the Egyptian women seek empowerment in different fields, including politics, they further prove themselves capable of breaking taboos of doing jobs, which were always dominated by men.

Se’da is one of those courageous women, whose passion to mechanics pushed her to take leave her work in psychology, and open her own mechanics business. There are jobs that are said to need “rough hands” to accomplish, referring to physical strength as a requirement to fulfill the job, which is typically a man thing, compared to women, who are referred to as “soft hands” in Egyptian culture.

However, women like Se’da, changed the equation, as they now compete male drivers, constructors, plasterers, pipe carriers and repairmen. “I have always loved disassembling and reinstalling things,” said Se’da Hajjaj, 30 yrs old, who graduated from the Sociology and Psychology department at the Faculty of Arts, and worked in this field as she believed in the importance of the knowledge that she studied to properly raise children raising and know how to deal with other people.

“Since I was a child, I searched and asked experts in mechanics art, and I enrolled in many courses,” she said, adding that she first started with applying what she learned on her car, and understood the different types of engines and fuels.

She speaks about the first challenge she faced was how to uninstall the engine, until she now became an expert that she can diagnose the malfunction before even examining the machine. Se’da is now famous in the mechanics’ field. “My goal in the beginning was to teach ladies and women how to deal with the cars and fix them, as there are many greedy mechanics who take advantage of the women’s lack of knowledge of the car mechanics and make her pay too much to fix the car,” she continued.

When she left her work in the field of psychology, and focused on her passion to mechanics, Se’da says that she upgraded her skills and was promoted at her new job in a company to repair cars. She then started a Facebook page and a youtube channel to teach women and provide consultations on car repairs after she opened her own business; a mechanics workshop. Out of her devotion to the mechanics field, Se’da says the “cars are like humans. Humans get sick and cars breakdown.” She added that “diagnosing the malfunction is more important than repairing it.”

When asked about how men see women working in hard jobs like herself, Se’da said “why men do not accept that women can learn to do such jobs and be capable of accomplishing them? why they insist on ignoring my efforts and work?”

She continued, “many men argue with me in arrogance to make fool of me as if I do not understand what I am doing, just because I am a woman.”

Se’da says that some men turn away when they come to the workshop and find her a woman mechanics.

For Se’da, a woman can be professional as a car mechanic, and still be a woman.

Interview was conducted in Arabic by Reporter Mennatullah Hamdy