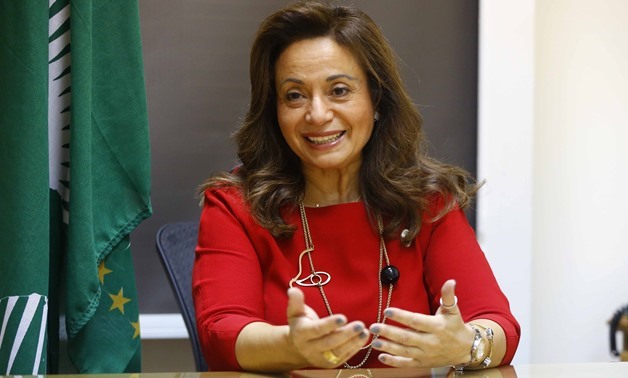 CAIRO – 8 February 2021: Egyptian commissioner Dr. Amani Abou-Zeid has been re-elected for the position of African Union's Infrastructure, Energy and Tourism Commissioner for a second term of four years.

Egypt has nominated African Union's Infrastructure, Energy and Tourism Commissioner Amani Abou-Zeid, to run in the elections of the African Union (AU) on six commissioner seats.

Elections for the posts of AU commissioner, his deputy, and the other six commissioner seats were held during the 38th session of the meeting of the executive council of the AU foreign ministers in January and February ahead of the AU Summit.

For her part, Dr. Amani stated that she is honored to have been re-elected to the AU post, adding that “she extends her sincere thanks to His Excellency President Abdel Fattah El-Sisi for his generous patronage, and to His Excellency Mr. Sameh Shoukry, the Minister of Foreign Affairs and his assistants, for the support they gave, which resulted in the success of the Egyptian candidate with 50 votes, the highest vote rate in the African Union’s elections.”

“I pledge to continue to work hard so that Egypt sets an example for the whole world to follow its footsteps in the fields of transportation, energy and informatics, given Egypt's pioneering experience in each field,” said Dr. Amani.

The National Council for Women extended sincere congratulations to Dr. Amani Abo-Zeid on her re-election to the post.

“[Dr. Amani’s] overwhelming victory in the AU elections proves the great successes she achieved in in all development projects and their efficiency,” the council added.

Who is Commissioner Amani Abou-Zeid?

In an exclusive interview in 2018 with Business Today Egypt, she weighs in on what needs to be done to unlock untapped potentials in Africa, as well as Egypt’s new leadership of the African Union.

In 2020, Abou-Zeid also participated in the 3rd Ministerial Conference on Road Safety in Sweden, where she made important remarks on the decline in road safety in the African continent. In an interview with Egypt on the sidelines, she explained the steps Egypt should consider to improve its road safety, citing controlling speed limits as one of the top factors.

“The work to improve road safety is a continuous work that does not stop, as every area and every street has a different challenge that requires specific effort,” Abou Zeid explained.

Prior to joining the AUC, Dr. Abou-Zeid has served for more than 30 years in leadership roles at top-tier international organizations, such as the African Development Bank (AfDB), UNDP and USAID, with a focus on infrastructure and energy programmes.

Dr. Abou-Zeid has received numerous international awards and recognition for her leadership and excellence, including the medal of Wissam Alaouite de l’Ordre Officier from His Majesty King Mohamed VI of Morocco and being recognized as a World Young Leader by the European Union.

African Union Commissioner for Infrastructure and Energy H.E. Dr. Amani Abou-Zeid was chosen to be one of the 100 Most Influential African Women (100MIAW) in 2019 by the leading PR and Rating firm Advance Media. Dr. Abou-Zeid is considered the only Egyptian and one of two North African women selected in the inaugural list. Advance Media’s list features distinguished women whose work considered an inspiration to the next generation of women in Africa.