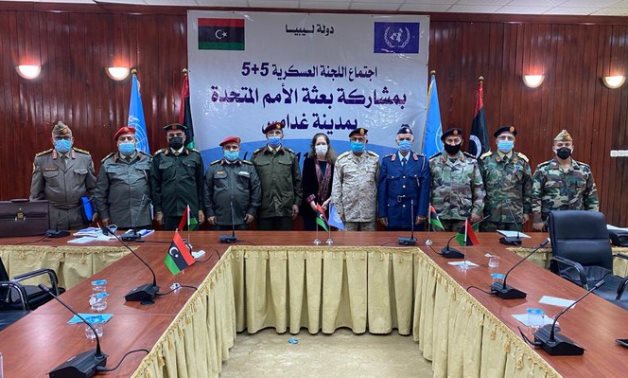 Photo by UNSMIL page: In the presence of Stephanie Williams, acting UN Secretary-General in Libya, the Joint Military Commission concluded its meeting in Ghadams

CAIRO - 4 November 2020: The two delegations of the Libyan Joint Military Committee (5 + 5) reached an agreement on the terms of implementing the ceasefire agreement, according to the United Nations Acting Support Envoy in Libya Stephanie Williams.

"There was an agreement and a spirit of responsibility regarding the terms of implementing the ceasefire in Libya," the UN envoy said in a press conference after the Ghadames talks.

Williams explained that 12 items are required to implement the ceasefire, most notably the formation of a military sub-committee to oversee the return of all foreign forces to their country and the departure and withdrawal of all forces from both sides to their camps.

According to the agreement signed in Geneva at the end of October, a period of 90 days was set for the departure of all foreign forces from Libyan territory.

"It was also agreed to hold the first meeting of the subcommittee in Sirte this month, in addition to setting a date for November 16 to hold a meeting in Brega, east of the country, to discuss unifying the Petroleum Facilities Guard," Williams said.

The two parties also agreed to establish joint military engineering teams to clear mines in cooperation with UN experts, to immediately resume flights to the cities of Ghadames and Sabha. This is in addition to the Joint Military Committee's request to the Security Council to issue a binding decision to fully implement the provisions of the ceasefire agreement, according to the UN envoy.

In response to a question regarding when the foreign forces will leave, Williams said: "The agreement set the date for the departure of these forces, now the responsibility rests with the countries participating in bringing them, so, these countries must implement their pledges and respect the consensus of the Libyans on the necessity of all these forces and mercenaries to leave the country."

She praised the two military delegations that participated in these negotiations, saying: "The military team showed a lot of courage and determination to accomplish all this serious and important work, and we will go to Tunisia in the coming days to discuss a roadmap with the politicians."

The Libyan parties prepare to start holding sessions of the Forum for Political Dialogue in Tunis on November 9.

Libya has been marred in violence between competing forces, militias and extremists since the toppling and killing of Muammar Gaddafi in 2011. The conflict now pits the Tripoli-based Government of National Accord (GNA) against the Libyan National Army (LNA), led by Field Marshal KhalifaHaftar, for control of the country.