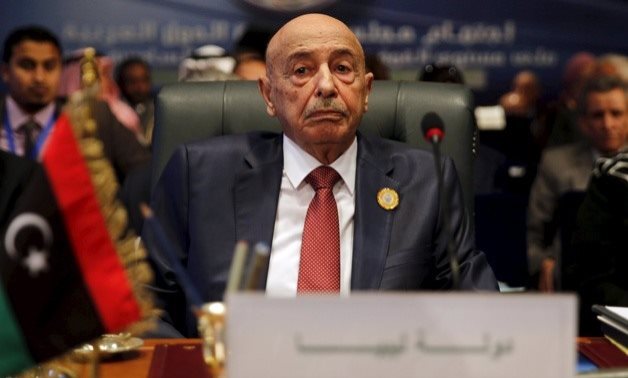 CAIRO – 9 August 2020: Libyan Parliament Speaker Aguila Saleh on Sunday arrived in Cairo, as part of international and regional meetings that aim at resolving the crisis in the war-torn country.

During his visit to Egypt, Saleh is set to meet with a number of officials and US Ambassador to Cairo Jonathan Cohen, sources said.

Anonymous sources on Friday told Libyan outlets that the United States had offered to mediate in the Libyan crisis, at the time of the Turkish mobilization of Syrian mercenaries and armed militias affiliated with Fayez al-Sarraj.

Egypt is keen to help Libyan brothers to find a comprehensive political solution to the crisis in their country, which would restore stability and undermine the impact of terrorist organizations in Libya and neighboring states, Egypt’s Foreign Minister Sameh Shoukry said on Tuesday.

The Egyptian House of Representatives has authorized President Abdel Fattah El-Sisi to “take necessary measures” to protect national security, giving a green light for the president to send troops to Libya.

This came in a closed session in July on protecting the Egyptian and Libyan national security against terror threats. The session was attended only by the Parliament members and the general secretariat of the House.

A week earlier, Sisi said at a meeting with Libyan tribal chiefs in Egypt that any Egyptian military intervention in Libya may only materialize upon a request by the Libyan people and a permission from the Egyptian House.