Man's respect for women in Egypt is determined by upbringing not education: Morsy 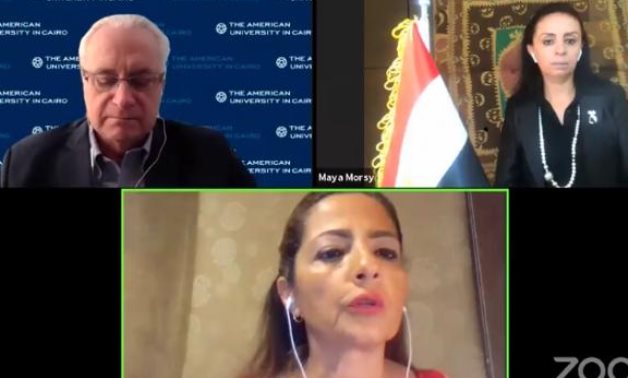 CAIRO – 21 July 2020: After one of its former students had been accused of sexual harassment by dozens of young women, The American University in Cairo (AUC) held a lecture on means of handling such incidents hosting President of the National Council for Women (NCW) Maya Morsy and AUC President Francis Ricciardoni via video-conference.

Morsy and Ricciardoni talked about establishing anti-sexual- harassment units at universities. "We encourage instant recording and complaints about sexual harassment incidents not only by victims but also by witnesses," Ricciardoni said.

"We have 21 universities in Egypt that established anti-sexual-harassment units, including those of Cairo, Ain Shams, Qena, and Kafr El Sheikh. Talks are underway with Al Azhar University," Morsy stated.

Commenting on the charges raised on social media against a student who left AUC to continue his studies in Spain's Madrid and were officially reported by four young women and a minor, Ricciardoni asserted, "We respond to complaints but not rumors."

AUC had issued a statement to negate that Ahmed Bassam Zaki was still a student at the university when an Instagram account was created for victims to come forward.

In the same context, the NCW president addressed cyber crimes against women.  "We detect bullying and blackmail pertinent to sexual harassment in the cyberspace. Hence, we coordinate with the ICT minister to tackle such incidents," Morsy stated.

Morsy advised women to be careful with sharing their social media passwords, and what they share in chats with people they do not know well, particularly photos.

Showcasing the roots of sexual harassment, the NCW president underlined the upbringing of the male child.

"In Egypt, education is not an indicator that a man respects women. Such thing is determined by the man's upbringing," Morsy said.

"Boys are brought up to not cry like girls who are labeled weak. Subsequently, those males may turn into abusers and harassers when they become adults as their subconscious was altered to think they're stronger," she elaborated.

"An ethics course must be taught in the freshman year at all universities," Morsy stresses. Given that adolescents are susceptible to media content, the NCW president added, "I beg lyrics and drama writers to consider thoroughly what they write as that may create a momentum that they may regret later."

"I expect that women will be more encouraged to come forward with sexual harassment incidents at police departments and the National Council For Women after the promulgation of a law ensuring the confidentiality of their identity," Morsy highlighted.

"Being an AUC alumna, we - male and female students - were very respectful to each other. We took into consideration we would hold leading positions in the future. The mention of AUC in such [sexual harassment] incident was heartbreaking to me," Morsy noted.

"I hope all female students feel empowered at AUC," Ricciardoni said adding that Egyptian women's struggle for empowerment has been organic and not induced by any foreign influence.

"Many social movements aimed at women empowerment are purely Egyptian," Ricciardoni said pointing out at the 1970s movie "I Want a Solution" tackling complicated divorce measures which were eased as a result.