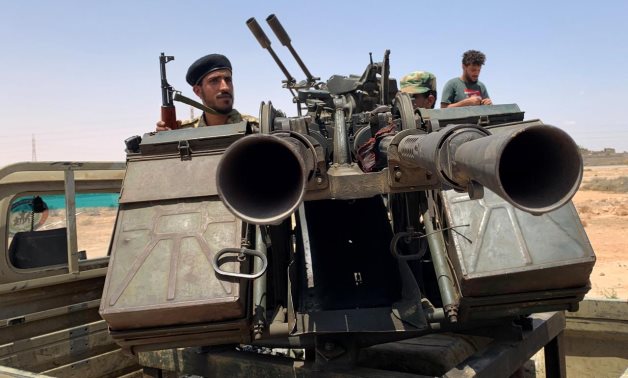 FILE - A member of the troops loyal to Libya's GNA rides a military vehicle as he prepares before heading to Sirte, on the outskirts of Misrata, Libya, July 18, 2020 - Reuters/Ayman Sahely

Two days later, armed militias affiliated with Turkey started to move towards Tawergha town near Sirte, reported Al Arabiya, in a sign of rejection of peaceful solution in Libya and in response to Sisi’s remarks during the meeting, through which he offered military intervention in Libya at the Libyan people’s request.

This sign was endorsed as Turkish President Recep Tayyip Erdogan told reporters on Friday that his country will stand by “our Libyan brothers”, apparently referring to people backing the GNA, in their fight against the LNA.

He also denounced Egypt’s support to Haftar and the African country’s stance announced by Sisi as “illegal.”

Responding to Erdogan, the Egyptian Foreign Ministry spokesman tild Al-Hadath TV channel: “it seems that the Libyan desire for Egypt’s support in countering terrorism and extremism and facing instability in their country has been clearly provocative to some people.”

“We are surprised in fact, that the Turkish administration engages its country in adventures beyond its borders and get involved in disputes that are, perhaps, thousands of kilometers away from its territories,” Spokesman Ahmed Hafez said.

“The Turkish adventures here constitute indifference to the friendly Turkish people and a waste of its resources,” he added.

European leaders, who have backed Sisi’s call for ceasefire in the war-torn country, slammed escalation in Libya in a joint statement on Saturday, and threatened to impose sanctions against countries that continued to violate a United Nations weapons embargo on Libya.

"We are ready to consider the possible use of sanctions if the breaches of the embargo at sea, on land or in the air continue, and look forward to the proposals that the High Representative of the European Union for foreign affairs and security policy will make in this regard," the three leaders said.

Also, Arab countries and Russia have called for an immediate cessation of hostile acts and a comprehensive political settlement to all crisis in Libya and other countries in the region.

Inside Libya, Saleh Al-Fandi, Head of Libya's Supreme Tribal Council denounced the Government of National Accord for resorting to Turkey’s “colonialism” amid a state of division that has extended for years between the GNA and both the LNA and the Parliament.

“We had known that colonialism comes to a state by force, occupies cities and kill people, and everyone consolidates to expel it,” Fandi told Egypt’s CBC eXtra news, denouncing the GNA for bringing the “Turkish occupation” which he said brought dozens of mercenaries and ISIS elements to the country.

One of top 10 strongest armies: What we know about capabilities of Egypt's Military

CAIRO - 17 July 2020: Speaking about possible and apparently imminent military intervention in Libya at the Libyan people's request, Egyptian President Abdel Fattah El Sisi on Thursday told Libyan tribal leaders that the Egyptian Army is the strongest in Africa and the region, but is a wise army that does not assail or invade territories.

During his meeting with the tribal chiefs, Sisi said Egypt has always stood by a peaceful solution in Libya through encouraging negotiations between Libyan factions. However, it will not stand idly as it watches activities that threaten Egypt’s national security.