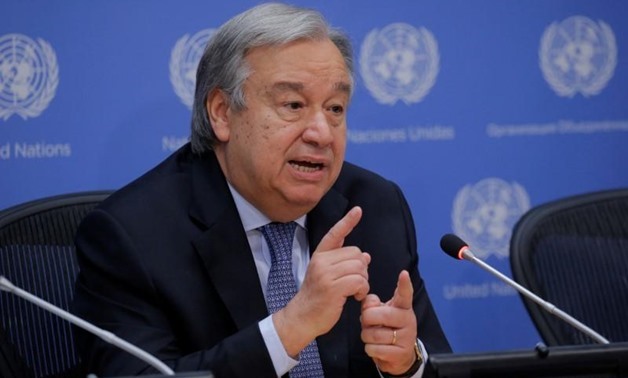 CAIRO - 1 July 2020: "I think the most important thing is to solve the Grand Ethiopian Renaissance Dam(GERD) crisis through dialogue between the three concerned countries," UN Secretary-General Antonio Guterres told the BBC.

He added that the United Nations is not looking for any leadership role in these efforts.

"I have made it clear to the Sudanese prime minister that the United Nations adequately supports the Sudanese initiative and we also support any solution reached through dialogue between the three countries," he said.

"The United Nations does not believe that the solution to the crisis lies in the UN Security Council, but rather through dialogue,"Guterres stressed.

The UN Security Council meeting was held on Monday at the request of Egypt to address the dam crisis, where Minister of Foreign Affairs SamehShoukry voiced Egypt's concern about the dam's impacton the lives of more than 150 million Egyptian and Sudanese citizens amid an absence of guarantees on whether the Ethiopian dam is safe on the downstream countries (Egypt and Sudan).

Other participating countries, including US, UK, France, Germany, China, and others voiced their support to the path of dialogue as it is the only way to find a solution to the outstanding issues.

US Ambassador to UN Kelly Craft stated that the United States urged the three countries to reach a balanced agreement on the filling and operation of the dam."We know the Nile is deeply entwined in their national identities and is critical to their histories and futures. Agreement on the GERD could expand economic opportunities, increase food security, and improve energy access – transforming the region and the lives of its 250 million people. We encourage all countries to build on the substantial progress of prior negotiations.”

South African Ambassador to UN Jerry Matthews Matjila said that the African Union (AU), which his country presides over this year, will find solutions and mechanisms and ensure a peaceful process regarding the outstanding issues of the GERD for the sake of the three countries.

Niger’s Ambassador to the UN AbdallahWafy stated that any escalation between the three countries is not in their interest.“We have to build on the previous negotiations.”

“The three parties should continue negotiations in terms of the Declaration of the Principles and in terms of international law. We support the AU and the UNGS efforts to find solutions to the legal outstanding issues, as all parties get benefits from the Nile,” said Viet Nam’s Ambassador to the UN LêLương Minh in his speech.

The meeting convened at Egypt’s request after Ethiopia announced its unilateral step of filling and operating the dam in July without reaching a final binding agreement between the three countries, violating the Declaration of Principles signed bythe three parties in 2015.

In June, the AU Extraordinary Bureau of the Assembly of Heads of States and Governments held a meeting to find a solution to the outstanding legal and technical issues after solving more than 90 percentof the disputed matters via forming a committee from the three countries and AU representatives to finalize the agreement in two weeks.

Since 2014, Egypt, Ethiopia, and Sudan have entered into negotiations on the building of the dam to avoid any possible threats on the Nile downstream countries [Egypt and Sudan]. The latest round of the talks, which convened early June, reached a stalemate, and was followed by the Ethiopian unilateral act of deciding to fill the dam’s reservoir mid-July without reaching a final agreement among the three countries.