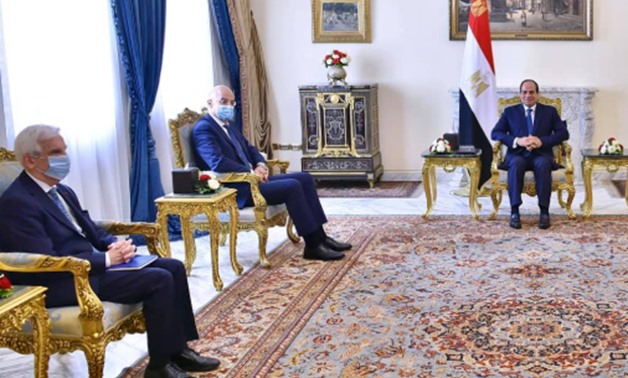 CAIRO – 18 June 2020: Egyptian President Abdel Fattah El-Sisi on Thursday received the Greek foreign minister in Cairo and affirmed that Egypt’s efforts in the Libyan issue aim to restore the pillars of the Libyan state and fill the power vacuum which caused terrorist groups to exist.

Earlier in June, Sisi announced Cairo's plan for a ceasefire in Libya, beginning June 8, after a tripartite meeting with the commander of the Libyan National Army (LNA) Khalifa Haftar and Speaker of Libyan Parliament Aguila Saleh. Sisi said that the political initiative, also known as the “Cairo Declaration”, would pave the way for a return to normal life in Libya.

During the meeting, President Sisi conveyed his greetings to the Greek prime minister and affirmed Egypt’s keenness to enhance cooperation mechanisms with Greece, in a way that helps achieve the joint interest of the peoples of the two countries, especially on the political, military, commercial and energy levels, , Egyptian Presidential Spokesman Bassam Radi said.

Greek Foreign Minister Nikos Dendias affirmed Greece’s support to the Cairo Declaration on Libya, which represents a message for peace and stability to the whole region.

He affirmed Greece’s appreciation of the firm cooperation ties between the two countries, which represent a model for constructive cooperation in the Mediterranean, especially in light of Egypt’s special role in the region and its efforts to combat illegal immigration, terrorism and extremist thought.

The meeting also affirmed that the EastMed Gas Forum, which has been established in 2019 based on an agreement between the three countries, is one of the most important tools to achieve common interests and open cooperation and investment horizons for the countries in the region in the fields of energy and gas.