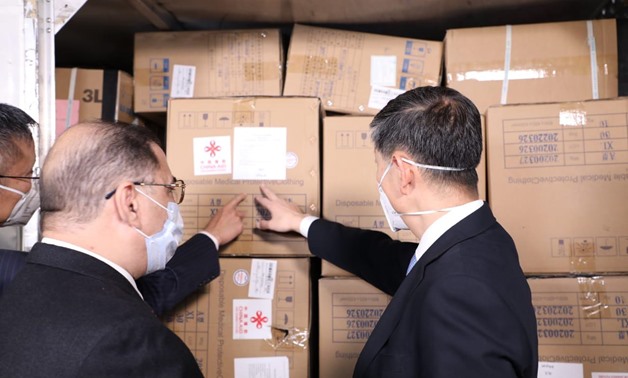 CAIRO – 16 May 2020: The third batch of medical aid provided by China to Egypt amid COVID-19 outbreak arrived on Saturday. The shipment is larger than the two previous ones as it weighs 30 tons.

Minister Hala Zayed thanked the government and people of China for their third gift to Egypt affirming the strength of bilateral relations between both countries.

The ceremony of the shipment arrival was attended by Deptuty Minister Mohamed Shawki, Chinese Ambassador to Cairo Liao Liqiang, and Assistant to Minister of Foreign Affairs for Asian Affairs Hani Selim.

Shawki stated that the equipment will be distributed among quarantine, respiratory diseases, and fever hospitals across the country. The official praised China's achievements in the face of the pandemic outbreak in a short period of time.

On his side, the Chinese envoy to Egypt highlighted that the delivery of the medical aid comes in parallel to the 64th anniversary of the introduction of diplomatic relations between both countries marking May 30.

The ambassador added that Egypt has been among the first countries that aided China in its battle to combat the spread of coronavirus, and that the Chinese-Egyptian relations would prosper after the crisis is over.

The diplomatic envoy praised the measures taken by the Egyptian government to contain the spread of the virus describing them as transparent, scientific, and effective.

In a press conference held in April, the Chinese ambassador revealed that the capacity of the existing Chinese-Egyptian medical masks factory in Cairo would be expanded as the number of production lines would be increased to five, and that the output of each will be 100,000 masks daily. As such, the stock of protective equipment will be enlarged given that the factory's daily output of masks will be half million, Liqiang underlined.

Responding to a question on whether the pandemic is having its toll on Chinese-Egyptian business partnerships, the Chinese ambassador stated that the negative impact is limited and can be contained.

Liqiang added that delegations of Chinese companies can visit the New Administrative Capital and SCzone to follow-up on the updates of partnerships between both countries there.

The ambassador stated that in 2019, Chinese direct investments in Egypt rose by 40 percent, which is $104 million stressing his confidence that cooperation between both countries will exceed previous levels after the pandemic is over.

Egypt had sent medical aids to China, Italy, the United States, the United Kingdom, and Sudan.

The aid sent to the United States on April 21 consisted of medical equipment, anesthesia drugs, and antibiotics as well as body bags, masks, and testing swabs.

On April 14, Egypt sent a large number of medical gowns to the UK in assistance to the British government’s efforts in its fight against the spread of Coronavirus.