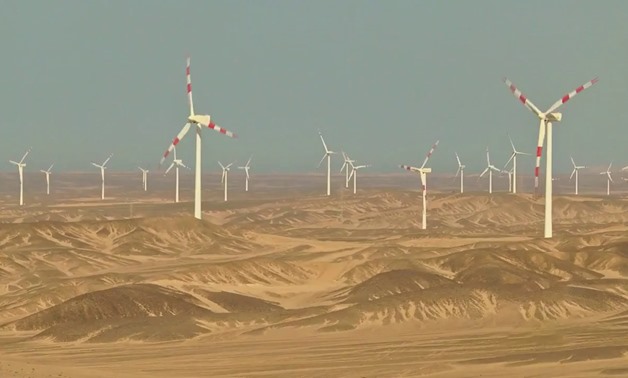 CAIRO – 15 May 2020: Egypt has become one of the largest electricity generators around the world, whether traditional or renewable.

In addition to three mega power plants in Beni Suef, south of Cairo, carried out by Siemens, and the Benban Solar Park in Aswan, comes the wind complex of Jabal Al-Zayt with total installed capacity of 580 MW.

The project was built by an EPC contract with cooperation with many international and national institutions such as the Japanese International Cooperation Agency (JICA), FIEM (Spain Government) and the KFW.

The complex’ capacity is 580 MWh, with the most optimum conditions for wind farms such as wind speed, wind stability and ground terrain which prompts to 51.7% annual average capacity factor, setting a world record because of that the majority of wind farms worldwide can accomplish just from 30% to 40% capacity factor.
Egypt Today brings its readers a number of highlights regarding the mega complex, including:

- Containing a system for monitoring migratory birds through the radar to stop the turbines when they pass and restart them after passing, which is a system used for the first time in the world.

- The project is divided into three zones. A red zone, where wind energy projects are panned due to heavy bird migration activity; a yellow zone where more environmental studies should take place; and, a green zone where the wind complex was implemented.

- The total cost of the mega project is LE 12 billion.

- The station has been completely constructed and connected to the National Electricity Network.