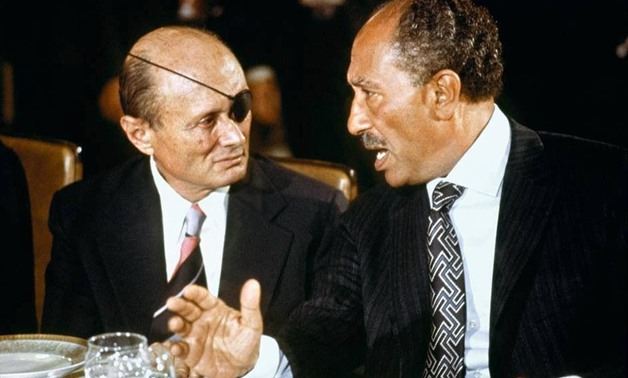 CAIRO – 3 May 2020: Late President Anwar al-Sadat ordered striking Late Israeli Defense Minister Moshe Dayan while the latter was checking forces existing on the west bank of the Suez Canal during the 6th of October War in 1973, Writer Sherif Aref highlighted in a video.

On October 6, 1973, the Egyptian Armed Forces crossed the Suez Canal, and destroyed Ber Lev Line - a series of fortifications - established by Israel after it had occupied Sinai in the Six-Day War that began on June 5, 1967.

The Egyptian Armed Forces restored 15 kilometers of Sinai through the war that lasted until October 22, 1973. Yet, some Israeli forces were able to cross to the east bank of Suez Canal on October 16, 1973 before retreating to Sinai on October 18, 1973 after fierce battles with the Egyptian Army.

In the video posted on the occasion of the 10th of Ramadan Day which marked 6th of October in 1973, Aref cited the information revealed by the chief of military intelligence and observation at the time, Major General Fouad Nassar, in an interview that was published in his book "Warriors and Spies."

The General Command of the Egyptian Armed Forces was informed by observation elements that Dayan was wandering among Israeli forces on the west Bank of Suez Canal.

Major General Nassar reported the piece of information to President Sadat who ordered designating the location of the Israeli defense minister within a surface area of 200*200 meters.

After the location was designated, President Sadat ordered launching airstrikes on the site with the aim of assassinating Dayan. The following day, observation elements sent a photo of the Israeli defense minister clinging to a palm tree few meters away from the targeted site. After checking the photo, President Sadat said, "that man is not meant to die today."

After the operations conclusion, the Egyptian-Israeli talks – brokered by the United States – resulted in the Peace Treaty in 1979 and the withdrawal of Israeli forces from Sinai, except for Taba. The town was restored by Egypt in 1989 through international arbitration.