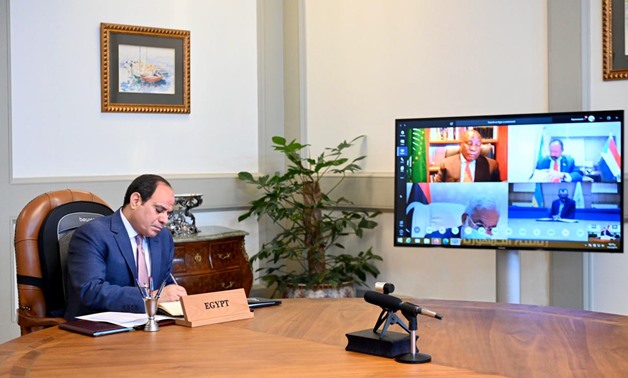 CAIRO – 29 April 2020: Egypt’s President Abdel Fattah El-Sisi on Wednesday highlighted the need for the continuous communication between African countries to coordinate joint efforts to face the novel coronavirus (COVID-19), as he addressed a number of African heads of state via video conferencing, the Egyptian Presidency said.

Sisi stressed the importance of the role of economic and regional unions in Africa in the face of the coronavirus pandemic, through allocating resources to implement relevant projects, within the framework of the private sector’s social responsibility.

He also highlighted the role of international financial institutions and international partners to support African countries on the economic level over the medium- and long-terms, in light of the negative repercussions coronavirus had on economy.

During the meeting, Sisi also reviewed Egypt’s experiment in dealing with coronavirus, especially concerning supporting health and economic sectors. He noted that such experience showed the significance of cooperation between people in each country and state institutions.

He reaffirmed that efforts to face coronavirus in each country should be in parallel with the continental efforts to combat other various threats, especially terrorism and extremism.

The meeting reviewed the current situation concerning the spread of coronavirus in Africa, including the infection rate and the number of cases and deaths.

Worldwide, the novel virus has caused the death of around 225,617 people, according to Worldometers, while the total number of cases stands at around 3,189,060 at the moment.

Report: Over 300,000 could die from coronavirus in Africa

WASHINGTON, April 17 (MENA) - A new report from the UN Economic Commission for Africa (UNECA) says that the continent of around 1.3 billion people could see as many as 300,000 deaths from the coronavirus in the best-case scenario.


In Egypt, 226 people tested positive for the novel coronavirus (COVID-19) recently and 21 people died, the Health Ministry said on Wednesday, shortly after it noted that 25% of the announced fatalities died before reaching quarantine hospitals as they arrived at hospitals too late.

This brings the total number of reported cases and deaths to 5,268 and 380 respectively, the ministry said.

As many as 1,712 people of the reported cases had their results come back negative, including 1,335 people who fully recovered.

Also, 31 cases, all of them Egyptians, left hospital after they recovered, according to the instructions of the World Health Organization (WHO).