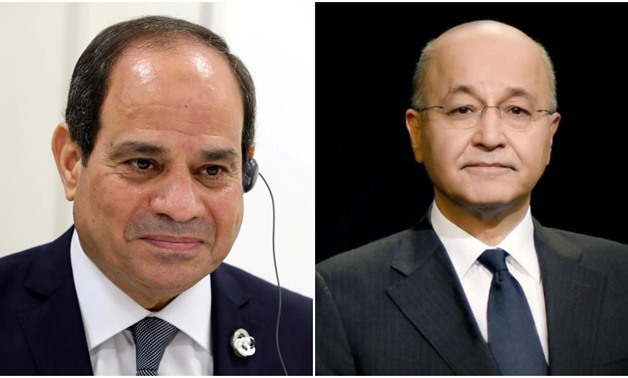 In a phone call, Sisi and Salih discussed the precautionary measures taken in both countries to face the spread of the novel coronavirus, the presidential spokesman said, and reviewed the possibility of exchanging data and expertise between the healthcare bodies in both countries in this field.

The Egyptian president affirmed Egypt’s support to the stability and security of Iraq and highlighted the Arab role the Middle Eastern country plays. Sisi also confirmed willingness to boost cooperation with Iraq in a way that serves the interests of the peoples of the two countries.

Salih, for his part, lauded Egypt’s efforts to support Iraq at all levels.

The Iraqi president hailed the historic and strong ties between both countries and affirmed his country’s willingness to strengthen bilateral cooperation.

He also hailed Egypt’s vital role to foster the mechanisms of joint Arab action to face the existing crises in the region.

Sisi and Salih, during the phone call, discussed a number of regional and Arab issues of mutual concern and also reviewed the two countries’ joint efforts to foster trilateral cooperation frameworks with Jordan.

The foreign ministers discussed during the meeting ways to apply the outcome of the summit between President Sisi, King Abdullah II of Jordan, and President Salih of Iraq, last September, on the sidelines of the current United Nations General Assembly meetings in New York.

Among the issues discussed during the tripartite meeting were the Palestinian and Syrian issues, as well as the fight against terrorism and the updates of the situation in Yemen and Libya.