In a meeting for the Cabinet’s Crisis Management department, Madbouli affirmed communicating with governors continuously since Wednesday evening to follow up on the efforts made to face the wave of unstable weather.

Madbouli said work shifts were cancelled on Thursday as initial information revealed that torrential rain will, in some areas, turn to flood. The work to remove rain water by water and sanitation companies has been facilitated as authorities took this precautionary measure, he added.

A 6-year-old child was killed after a huge tree fell on his house due to the bad weather, injuring his mother and the two other brothers in Qena governorate, Upper Egypt.

Amid heavy rain, Cabinet’s media advisor Hany Younes published photos on Facebook showing Housing Minister Assem Al-Gazzar in one of the streets in New Cairo in the Egyptian capital, while supervising sanitation work to face the impact of torrential rain.

Giza Governor Ahmed Rashed has also been available in streets of Munsha’at Al-Qanater to supervise efforts made to shrink the impact of the heavy rain. 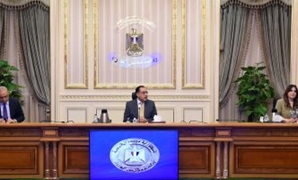