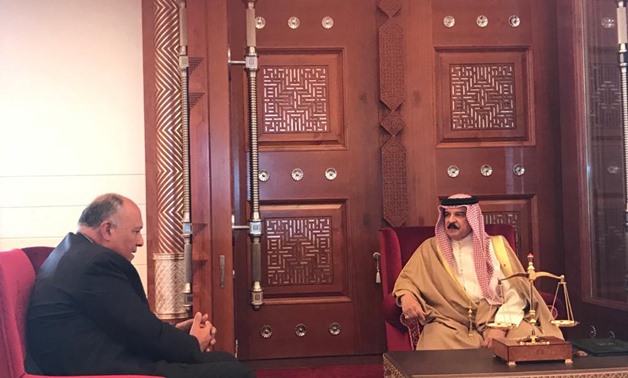 CAIRO – 11 March 2020: Bahrain’s King Hamad bin Isa Al-Khalifa on Wednesday affirmed his country’s solidarity with Egypt to ensure its legitimate Nile water rights, as Egypt and Ethiopia have been in a diplomatic conflict, especially recently, over the filling and operation of the Grand Ethiopian Renaissance Dam.

This comes days after an Egyptian Foreign Ministry spokesperson expressed his disappointment over the Sudanese Foreign Ministry’s statement that voiced reservations regarding a draft resolution issued by the Arab Council for Foreign Ministers on GERD.

In this regard, the Bahraini king affirmed his country’s support to the United States’ efforts to reach an agreement between Egypt, Sudan and Ethiopia in terms of filling and operating the Ethiopian dam.

Shoukry handed King Hamad a written message from Egyptian President Abdel Fattah al-Sisi, which highlighted the special relations with Bahrain and the regional and international updates as well as issues of mutual concern.

Shoury, during the meeting, hailed the efforts made by the Bahraini king to develop ties with Egypt and affirmed appreciation to the Arab stances of Bahrain toward Egypt and the Bahraini role in joint Arab work.

Earlier in March, President Sisi sent a message to Jordanian King Abdullah II on the recent stalemate between Egypt, Sudan, and Ethiopia on GERD, said the Egyptian foreign ministry spokesman in a statement.

The message was delivered by Shoukry, who embarked on a tour to some Arab countries, including Jordan, Saudi Arabia, the UAE, Iraq, Kuwait, Bahrain, and Oman Sultanate.