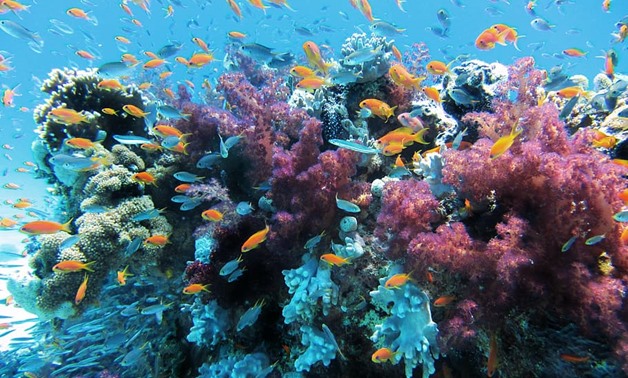 CAIRO - 3 March 2020: A new study conducted by researchers from Al Azhar University, Cairo and University of Essex, UK, discovered five unique kinds of algae that could help the coral reefs in the northern Red Sea to be resilient to climate change and avoid the process of bleaching.

“The newly discovered algae have not been recorded elsewhere, highlighting endemism in the region, and likely playing important roles for heat resistance in the northern Red Sea,” said Eslam Osman, the lead author of the study and lecturer of Marine Ecology in the Faculty of Science at Al-Azhar University.

"There is a mutualistic relation between the coral reefs and the algae living inside, as the algae provide the reefs with food and oxygen in exchange for their environmental protection," clarified Osman.

He noted that corals bleach [turn white due to being stressed by the rising of oceans temperature] when they are exposed to 1°C in the summer, which expels the algae (zooxanthellae) outside the coral reefs, but the northern coral reefs could stand against high temperatures of up to 8 °C in the summer, contrasting global bleaching pattern.

“We identified five novel species of microscopic algae that have not been previously recorded elsewhere. Also, corals in the northern Red Sea associate with unique bacterial communities,” he said.

The study, which was carried out in cooperation with scientists from Germany, Saudi Arabia, USA and Australia and was

published in the BMC Microbiome journal

, found another factor that could make the corals resilient to climate change. It found types of bacteria in coral mucus “known for their ability to metabolize a chemical compound called DMSP, which potentially sweep toxic radicals within corals tissue during heat stress,” said Osman.

He clarified that the presence of this chemical compound and its metabolites could help the corals to resist the high water temperature and consequently, the northern Red Sea will be one of the last safe shelter for coral reefs on earth.

“Our study provides new pointers on how corals in the Red Sea may resist high temperature stress. Corals in this region harbor certain types of microbes that are endemic for this region and putatively contribute to the exceptional thermal tolerance of corals from the Northern Red Sea,” said professor Christian R Voolstra, coral ecological genomicist at the University of Konstanz, Germany, and an author of the study in a press statement.

“Our study highlights that coral conservation strategy must extend not only to protect coral habitats in the Red Sea, but also to protect their associated microbes that likely play a central role in their health. Improving seawater quality is a key step to prevent microbial shifts and the introduction of pathogens to the coral reef ecosystem,” Voolstra added.

As per a report by the U.S. National Oceanic and Atmospheric Administration (NOAA) in August 2018, 75 percent of coral reefs on Earth experienced stress induced bleaching over the period between 2014 and 2017, adding that about 30 percent of the reefs reached the mortality level.